Sudan ( or Arabic: السودان‎, romanized: as-Sūdāncode: ar is deprecated ), officially the Republic of the Sudan (Arabic: جمهورية السودان‎, romanized: Jumhūriyyat as-Sūdāncode: ar is deprecated ), is a country in Northeast Africa. It borders the countries of Central African Republic, Chad, Egypt, Eritrea, Ethiopia, Libya, South Sudan, and the Red Sea. It has a population of 44.91 million people as of 2021 and occupies 1,886,068 square kilometres (728,215 square miles), making it Africa's third-largest country by area, and the third-largest by area in the Arab League. It was the largest country by area in Africa and the Arab League until the secession of South Sudan in 2011, since which both titles have been held by Algeria. Its capital is Khartoum and its most populated city is Omdurman (part of metro Khartoum).

Sudan's history goes back to the Pharaonic period, witnessing the Kingdom of Kerma (c. 2500–1500 BC), the subsequent rule of the Egyptian New Kingdom (c. 1500 BC–1070 BC) and the rise of the Kingdom of Kush (c. 785 BC–350 AD), which would in turn control Egypt itself for nearly a century. After the fall of Kush, the Nubians formed the three Christian kingdoms of Nobatia, Makuria and Alodia, with the latter two lasting until around 1500. Between the 14th and 15th centuries, most of Sudan was settled by Arab nomads. From the 16th–19th centuries, central and eastern Sudan were dominated by the Funj sultanate, while Darfur ruled the west and the Ottomans the north. From the 19th century, the entirety of Sudan was conquered by Egypt under the Muhammad Ali dynasty. It was under Egyptian rule that Sudan acquired its modern borders, and began the process of political, agricultural, and economic development. In 1881, nationalist sentiment in Egypt led to the Orabi Revolt, "weakening" the power of the Egyptian monarchy, and eventually leading to the occupation of Egypt by the United Kingdom. At the same time, religious-nationalist fervour in Sudan erupted in the Mahdist Revolt led by the self-proclaimed Mahdi Muhammad Ahmad, resulting in the establishment of the rebel Caliphate of Omdurman. The Mahdist forces were eventually defeated by a joint Egyptian-British military force, restoring the authority of the Egyptian monarch. However, Egyptian sovereignty in Sudan would henceforth be somewhat nominal, as the true power in both Egypt and Sudan was now the United Kingdom. In 1899, under British pressure, Egypt agreed to share sovereignty over Sudan with the United Kingdom as a condominium. In effect, Sudan was governed as a British possession. The 20th century saw the growth of both Egyptian and Sudanese nationalism focusing on ending the United Kingdom's occupation. The Egyptian Revolution of 1952 toppled the monarchy, and demanded the withdrawal of British forces from all of Egypt and Sudan. Muhammad Naguib, one of the two co-leaders of the revolution, and Egypt's first President, who was half-Sudanese and raised in Sudan, made securing Sudanese independence a priority of the revolutionary government. The following year, under Egyptian and Sudanese pressure, the United Kingdom agreed to Egypt's demand for both governments to terminate their shared sovereignty over Sudan, and to grant Sudan independence. On 1 January 1956, Sudan was duly declared an independent state.

Since independence, Sudan has been ruled by a series of unstable parliamentary governments and military regimes. Under the Jaafar Nimeiry regime, Sudan began Islamist rule. This exacerbated the rift between the Islamic north, the seat of the government and the Animists and Christians in the south. Differences in language, religion, and political power erupted in a civil war between government forces, influenced by the National Islamic Front (NIF), and the southern rebels, whose most influential faction was the Sudan People's Liberation Army (SPLA), eventually concluding in the independence of South Sudan in 2011. Between 1989 and 2019, Sudan experienced a 30-year-long military dictatorship led by Omar al-Bashir accused of human rights abuses including torture, persecution of minorities, allegations of sponsoring global terrorism, and ethnic genocide due to its role in the War in the Darfur region that broke out in 2003. Overall, the regime's actions killed between 300,000 and 400,000 people. Protests erupted in 2018, demanding Bashir's resignation, which resulted in a coup d'état on 11 April 2019.

Islam was Sudan's state religion and Islamic laws applied from 1983 until 2020 when the country became a secular state. The economy has been described as lower-middle income and relies on oil production despite long-term international sanctions and isolation. Sudan is a member of the United Nations, the Arab League, African Union, COMESA, Non-Aligned Movement and the Organisation of Islamic Co-operation. 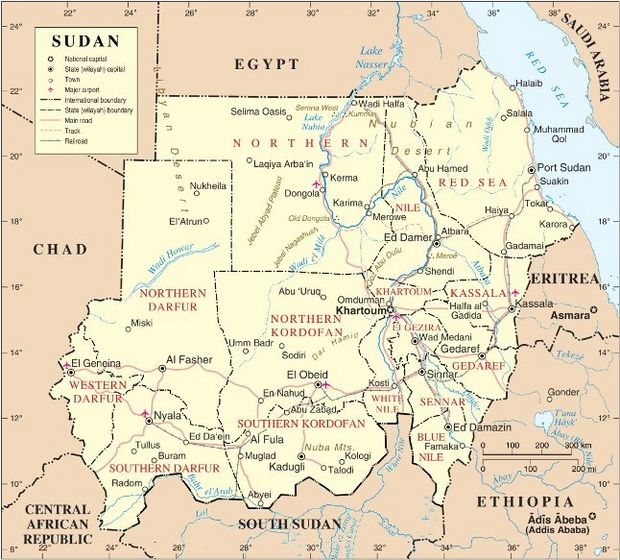 A map of Sudan. The Hala'ib Triangle has been under Egyptian administration since 2000. 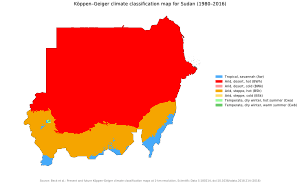 Sudan is situated in northern Africa, with an 853 km (530 mi) coastline bordering the Red Sea. It has land borders with Egypt, Eritrea, Ethiopia, South Sudan, the Central African Republic, Chad, and Libya. With an area of 1,886,068 km2 (728,215 sq mi), it is the third-largest country on the continent (after Algeria and Democratic Republic of the Congo) and the sixteenth-largest in the world.

Sudan lies between latitudes 8° and 23°N. The terrain is generally flat plains, broken by several mountain ranges. In the west, the Deriba Caldera (3,042 m or 9,980 ft), located in the Marrah Mountains, is the highest point in Sudan. In the east are the Red Sea Hills.

The Blue Nile and White Nile rivers meet in Khartoum to form the Nile, which flows northwards through Egypt to the Mediterranean Sea. The Blue Nile's course through Sudan is nearly 800 km (497 mi) long and is joined by the Dinder and Rahad Rivers between Sennar and Khartoum. The White Nile within Sudan has no significant tributaries.

There are several dams on the Blue and White Niles. Among them are the Sennar and Roseires Dams on the Blue Nile, and the Jebel Aulia Dam on the White Nile. There is also Lake Nubia on the Sudanese-Egyptian border.

The amount of rainfall increases towards the south. The central and the northern part have extremely dry desert areas such as the Nubian Desert to the northeast and the Bayuda Desert to the east; in the south, there are grasslands and tropical savanna. Sudan's rainy season lasts for about four months (June to September) in the north, and up to six months (May to October) in the south.

The dry regions are plagued by sandstorms, known as haboob, which can completely block out the sun. In the northern and western semi-desert areas, people rely on the scant rainfall for basic agriculture and many are nomadic, travelling with their herds of sheep and camels. Nearer the River Nile, there are well-irrigated farms growing cash crops. The sunshine duration is very high all over the country but especially in deserts where it could soar to over 4,000 h per year. 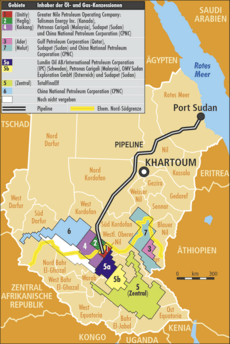 Oil was Sudan's main export, with production increasing dramatically during the late 2000s, in the years before South Sudan gained independence in July 2011. With rising oil revenues, the Sudanese economy was booming, with a growth rate of about nine percent in 2007. The independence of oil-rich South Sudan, however, placed most major oilfields out of the Sudanese government's direct control and oil production in Sudan fell from around 450,000 barrels per day (72,000 m3/d) to under 60,000 barrels per day (9,500 m3/d). Production has since recovered to hover around 250,000 barrels per day (40,000 m3/d) for 2014–15.

In order to export oil, South Sudan relies on a pipeline to Port Sudan on Sudan's Red Sea coast, as South Sudan is a landlocked country, as well as the oil refining facilities in Sudan. In August 2012, Sudan and South Sudan agreed a deal to transport South Sudanese oil through Sudanese pipelines to Port Sudan.

The People's Republic of China is one of Sudan's major trading partners, China owns a 40 percent share in the Greater Nile Petroleum Operating Company. The country also sells Sudan small arms, which have been used in military operations such as the conflicts in Darfur and South Kordofan.

Agricultural production remains Sudan's most-important sector, employing 80 percent of the workforce and contributing 39 percent of GDP, but most farms remain rain-fed and susceptible to drought. Instability, adverse weather and weak world-agricultural prices ensures that much of the population will remain at or below the poverty line for years.

The Merowe Dam, also known as Merowe Multi-Purpose Hydro Project or Hamdab Dam, is a large construction project in northern Sudan, about 350 kilometres (220 mi) north of the capital, Khartoum. It is situated on the River Nile, close to the Fourth Cataract where the river divides into multiple smaller branches with large islands in between. Merowe is a city about 40 kilometres (25 mi) downstream from the dam's construction site.

The main purpose of the dam will be the generation of electricity. Its dimensions make it the largest contemporary hydropower project in Africa. The construction of the dam was finished December 2008, supplying more than 90 percent of the population with electricity. Other gas-powered generating stations are operational in Khartoum State and other states. 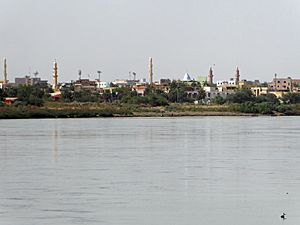 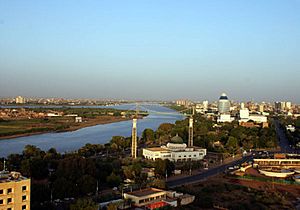 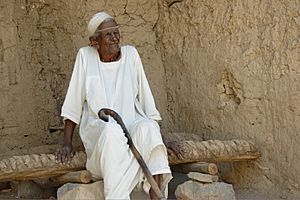 The Arab presence is estimated at 70% of the Sudanese population and they are mostly Arabized Nubians. Others include North Sudan Nubians, Zurga(South and West Sudan), and Copts.

Sudan has 597 groups that speak over 400 different languages and dialects. Sudanese Arabs are by far the largest ethnic group in Sudan. They are almost entirely Muslims; while the majority speak Sudanese Arabic, some other Arab tribes speak different Arabic dialects like Awadia and Fadnia tribes and Bani Arak tribes who speak Najdi Arabic; and Beni Ḥassān, Al-Ashraf and Rashaida who speak Hejazi Arabic. In addition, the Western province comprises various ethnic groups, while a few Arab Bedouin of the northern Rizeigat and others who speak Sudanese Arabic share the same culture and backgrounds of the Sudanese Arabs.

The majority of Arabised and indigenous tribes like the Fur, Zaghawa, Borgo, Masalit and some Baggara ethnic groups, who speak Chadian Arabic, show less cultural integration because of cultural, linguistic and genealogical variations with other Arab and Arabised tribes.

Sudanese Arabs of Northern and Eastern parts descend primarily from migrants from the Arabian Peninsula and intermarriages with the pre-existing indigenous populations of Sudan, especially the Nubian people, who also share a common history with Egypt. Additionally, a few pre-Islamic Arabian tribes existed in Sudan from earlier migrations into the region from Western Arabia, although most Arabs in Sudan are dated from migrations after the 12th century.

The vast majority of Arab tribes in Sudan migrated into the Sudan in the 12th century, intermarried with the indigenous Nubian and other African populations and introduced Islam.

Sudan consists of numerous other non-Arabic groups, such as the Masalit, Zaghawa, Fulani, Northern Nubians, Nuba, and the Beja people.

There is also a small, but prominent Greek community.

People from Sudan are called Sudanese. About 45 million people live in Sudan. About 4 million of these live in Khartoum or in towns that are joined to it.

Arabic is the official language of Sudan, but people also speak Nubian, Nilotic and English. Many other languages are spoken in different parts of the country as well.

Most Sudanese people have Islam as their religion. A small number are Christian. Some people have other religions that are called tribal (local) beliefs.

The currency of Sudan is called the Sudanese Pound (Jinneh).

For several years, the Darfur conflict has been going on in Sudan. Over 400,000 people have died in it.

All content from Kiddle encyclopedia articles (including the article images and facts) can be freely used under Attribution-ShareAlike license, unless stated otherwise. Cite this article:
Sudan Facts for Kids. Kiddle Encyclopedia.