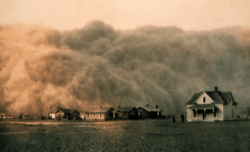 A dust storm, or sandstorm, is a storm of small particles of sand and dirt. Dust storms happen when a strong wind front blows loose sand and dust from a dry surface. Particles are picked up and suspended in the air, causing soil erosion where they were. The wind drops them in another place where they can form silt.

As the force of wind passing over dirt increases, particles of sand first start to vibrate, then to saltate ("leaps"). As they repeatedly strike the ground, they loosen and break off smaller particles of dust which then begin to travel in suspension. At wind speeds above that which causes the smallest to suspend, there will be a population of dust grains moving by a range of mechanisms: suspension, saltation and creep.

Animation showing the global movement of dust from an Asian dust storm.

Drought and wind contribute to dust storms, as do poor farming and grazing practices by exposing the dust and sand to the wind. 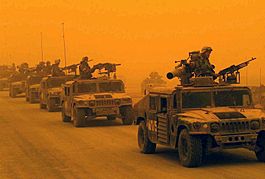 A convoy endures a dust storm in Iraq during the invasion of 2003.

A sandstorm can transport and carry large volumes of sand unexpectedly. Dust storms can carry large amounts of dust, with the leading edge being composed of a wall of thick dust as much as 1.6 km (0.99 mi) high.

Dust and sand storms which come off the Sahara Desert are locally known as a simoom or simoon (sîmūm, sîmūn). The haboob (həbūb) is a sandstorm prevalent in the region of Sudan around Khartoum, with occurrences being most common in the summer.

The Sahara desert is a key source of dust storms, particularly the Bodélé Depression and an area covering the confluence of Mauritania, Mali, and Algeria.

Dust storms have also been shown to increase the spread of disease across the globe. Virus spores in the ground are blown into the atmosphere by the storms with the minute particles and interact with urban air pollution.

Dust storms are not limited to Earth and have been known to form on other planets such as Mars. These dust storms can extend over larger areas than those on Earth, sometimes encircling the planet, with wind speeds as high as 60 miles per hour (97 km/h). However, given Mars' much lower atmospheric pressure (roughly 1% that of Earth's), the intensity of Mars' storms could never reach the kind of hurricane-force winds experienced on Earth. Martian dust storms are formed when solar heating warms the Martian atmosphere and causes the air to move, lifting dust off the ground. The chance for storms is increased when there are great temperature variations like those seen at the equator during the Martian summer.

All content from Kiddle encyclopedia articles (including the article images and facts) can be freely used under Attribution-ShareAlike license, unless stated otherwise. Cite this article:
Dust storm Facts for Kids. Kiddle Encyclopedia.