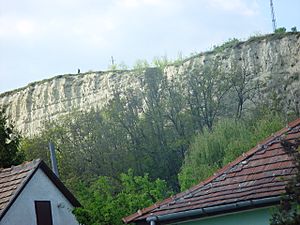 Loess in Hungary has travelled by wind from Asia

Among the classifications of soil types, loess (pronounced lös, from the German Löss, and ultimately from Swiss German lösch, loose) is a fine, silty, windblown (eolian) type of unconsolidated deposit, or, sometimes the term refers to the soil derived from it. It is derived from glacial deposits, where glacial activity has ground rocks very fine (rock flour). After drying, these deposits are highly susceptible to wind erosion, and downwind deposits may become very deep, even hundreds of feet, as in areas of China and midwestern USA.

Hungary has several areas that are covered by loess. At locations such as Dunaújváros and Balatonakarattya loess walls are exposed as "reefs". (See illustration)

The central part of Belgium, Europe is also covered by thick loess stacks. An interesting loess site where late Middle and Late Pleistcene Neanderthal artefacts were found within the soils between the loess layers is Veldwezelt-Hezerwater.

Loess grains are angular, with little polishing or rounding, composed of crystals of quartz, feldspar, mica and other minerals. Because the grains are angular, loess will often stand in banks for many years without slumping. This soil has the characteristic called vertical cleavage, which makes it easily excavated to form cave dwellings, a still-popular method of making human habitations in some parts of China. But it is also highly erodible by water or wind, and soils underlain by loess tend to be excessively drained (droughty). As the grains weather, they release minerals which means that soils derived from loess are usually very rich.

All content from Kiddle encyclopedia articles (including the article images and facts) can be freely used under Attribution-ShareAlike license, unless stated otherwise. Cite this article:
Loess Facts for Kids. Kiddle Encyclopedia.