The city has increased in population since 1900, when 14,834 people lived here. The population was 26,407 at the 2000 census. In 2010, it was designated as the principal city of a Micropolitan Statistical Area (MSA) with a total population of 49,644. This MSA includes all of Warren County.

The entire Choctaw Nation's historic territory compared to the U.S. state of Mississippi.

The area which is now Vicksburg was long occupied by the Natchez Native Americans as part of their historical territory along the Mississippi. The Natchez spoke a language isolate not related to the Muskogean languages of the other major tribes in the area. Before the Natchez, other indigenous cultures had occupied this strategic area for thousands of years.

The first Europeans who settled the area were French colonists, who built Fort-Saint-Pierre in 1719 on the high bluffs overlooking the Yazoo River at present-day Redwood. They conducted fur trading with the Natchez and others and started plantations. On 29 November 1729, the Natchez attacked the fort and plantations in and around the present-day city of Natchez. They killed several hundred settlers, including the Jesuit missionary Father Paul Du Poisson. As was the custom, they took a number of women and children as captives.

The Natchez War was a disaster for French Louisiana, and the colonial population of the Natchez District never recovered. But, aided by the Choctaw, traditional enemies of the Natchez, the French defeated and scattered the Natchez and their allies, the Yazoo.

The Choctaw Nation took over the area by right of conquest and inhabited it for several decades. Under pressure from the US government, in 1801 the Choctaw agreed to cede nearly 2,000,000 acres (8,100 km2) of land to the US under the terms of the Treaty of Fort Adams. The treaty was the first of a series that eventually led to the removal in 1830 of most of the Choctaw to Indian Territory west of the Mississippi River. Some Choctaw remained in Mississippi, citing article XIV of the Treaty of Dancing Rabbit Creek; they became citizens of the state and the United States. They struggled to maintain their culture against the pressure of the binary slave society, which classified people as only white or black.

In 1790, the Spanish founded a military outpost on the site, which they called Fort Nogales (nogales meaning "walnut trees"). When the Americans took possession in 1798 following the American Revolutionary War and a treaty with Spain, they changed the name to Walnut Hills. The small village was incorporated in 1825 as Vicksburg, named after Newitt Vick, a Methodist minister who had established a Protestant mission on the site.

In 1835, during the Murrell Excitement, a mob from Vicksburg attempted to expel the gamblers from the city, because the citizens were tired of the rougher element treating the city residents with nothing but contempt. They captured and hanged five gamblers who had shot and killed a local doctor. The historian Joshua D. Rothman calls this event "the deadliest outbreak of extralegal violence in the slave states between the Southampton Insurrection and the Civil War." 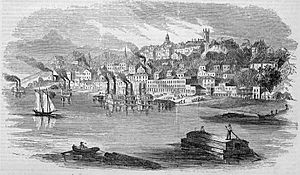 During the American Civil War, the city finally surrendered during the Siege of Vicksburg, after which the Union Army gained control of the entire Mississippi River. The 47-day siege was intended to starve the city into submission. Its location atop a high bluff overlooking the Mississippi River proved otherwise impregnable to assault by federal troops. The surrender of Vicksburg by Confederate General John C. Pemberton on July 4, 1863, together with the defeat of General Robert E. Lee at Gettysburg the day before, has historically marked the turning point in the Civil War in the Union's favor.

Some accounts say that the residents of Vicksburg did not celebrate the national holiday of 4th of July again until 1945, after United States victory in World War II, but this is inaccurate. Large Fourth of July celebrations were being held by 1907, and informal celebrations took place before that. 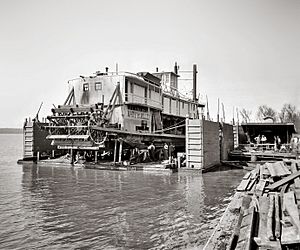 Floating drydock in Vicksburg, circa 1905

Because of the city's location on the Mississippi River, in the 19th century it built an extensive trade from the prodigious steamboat traffic. It shipped out cotton coming to it from surrounding counties and was a major trading city.

In 1876 a Mississippi River flood cut off the large meander flowing past Vicksburg, leaving limited access to the new channel. The city's economy suffered greatly. Between 1881 and 1894, the Anchor Line, a prominent steamboat company on the Mississippi River from 1859 to 1898, operated a steamboat called the City of Vicksburg.

Political and racial unrest after the Civil War

In the first few years after the Civil War, white Confederate veterans developed the Ku Klux Klan, beginning in Tennessee; it had chapters throughout the South and attacked blacks and their supporters. It was suppressed about 1870. By the mid-1870s, new white paramilitary groups had arisen in the Deep South, including the Red Shirts in Mississippi, as whites struggled to regain political and social power over the black majority. Elections were marked by violence and fraud as whites worked to suppress black Republican voting.

Nonetheless, in August 1874 a black sheriff, Peter Cosby, was elected in Vicksburg. Letters by a white planter, Batchelor, detail the preparations of whites for what he described as a "race war," including acquisition of the newest guns, Winchester 16 mm. On December 7, 1874, white men disrupted a black Republican meeting celebrating Cosby's victory and held him in custody before running him out of town. He advised blacks from rural areas to return home; along the way, some were attacked by armed whites. During the next several days, armed white mobs swept through black areas, killing other men at home or out in the fields. Sources differ as to total fatalities, with 29-50 blacks and 2 whites reported dead at the time. Twenty-first century historian Emilye Crosby estimates that 300 blacks were killed in the city and the surrounding area of Claiborne County. The Red Shirts were active in Vicksburg and other Mississippi areas, and black pleas to the federal government for protection were not met.

At the request of Governor Adelbert Ames, who had left the state during the violence, President Ulysses S. Grant sent Federal troops to Vicksburg in January 1875. In addition, a congressional committee investigated what was called the Vicksburg Riot at the time (and reported as the Vicksburg Massacre by northern newspapers.) They took testimony from both black and white residents, as reported by the New York Times, but no one was ever prosecuted for the deaths. The Red Shirts and other white insurgents suppressed Republican voting by both whites and blacks; smaller-scale riots were staged in the state up to the 1875 elections, at which white Democrats took back control of the state legislature. Due to their success, other southern states adopted what they called the "Mississippi Plan", an organized effort to suppress the black vote and unite whites under the Democrats.

Under new constitutions, amendments and laws passed from 1890 (Mississippi) to 1908 in the remaining southern states, white Democrats disenfranchised most blacks and many poor whites by creating barriers to voter registration, such as poll taxes, literacy tests and grandfather clauses. They passed laws imposing Jim Crow and racial segregation of public facilities.

The near exclusion of most blacks from the political system lasted for decades until after Congressional passage of civil rights legislation in the mid-1960s.

The United States Army Corps of Engineers diverted the Yazoo River in 1903 into the old, shallowing channel to rejuvenate the waterfront of Vicksburg. Railroad access to the west across the river continued to be by transfer steamers and ferry barges until a combination railroad-highway bridge was built in 1929. Vicksburg has the only crossing over the Mississippi River between Baton Rouge and Memphis. It is the only highway crossing of the river between Greenville and Natchez.

Interstate 20 bridged the river after 1973. Freight rail traffic still crosses via the old bridge. North-South transportation links are by the Mississippi River and U.S. Highway 61.

On March 12, 1894, the popular soft drink Coca-Cola was bottled for the first time in Vicksburg by Joseph A. Biedenharn, a local confectioner. Today, surviving 19th-century Biedenharn soda bottles are prized by collectors of Coca-Cola memorabilia. His original candy store has been renovated as the Biedenharn Coca-Cola Museum.

During the Great Mississippi Flood of 1927, in which hundreds of thousands of acres were inundated, Vicksburg served as the primary gathering point for refugees. Relief parties put up temporary housing, as the flood submerged a large percentage of the Mississippi Delta.

Because of the overwhelming damage from the flood, the US Army Corps of Engineers established the Waterways Experiment Station as the primary hydraulics laboratory, to develop protection of important croplands and cities. Now known as the Engineer Research and Development Center, it applies military engineering, information technology, environmental engineering, hydraulic engineering, and geotechnical engineering to problems of flood control and river navigation.

Lynchings and other forms of vigilante violence continued to occur in Vicksburg after the start of the 20th century. In May 1903, for instance, two black men charged with murdering a planter were taken from jail by a mob of 200 farmers and lynched before they went to trial.

Particularly after World War II, in which many blacks served, returning veterans began to be active in the civil rights movement, wanting to have full citizenship after fighting in the war. In Mississippi, activists in the Vicksburg Movement became prominent during the 1960s. 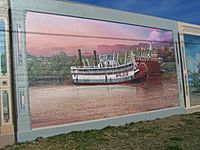 Mural of the Sprague on Vicksburg floodwall

The Vicksburg Post is now located in a new building in a small shopping center off Interstate 20.

In 2001, a group of Vicksburg residents visited the Paducah, Kentucky mural project, looking for ideas for their own community development. In 2002, the Vicksburg Riverfront murals program was begun by Louisiana mural artist Robert Dafford and his team on the floodwall located on the waterfront in downtown. Subjects for the murals were drawn from the history of Vicksburg and the surrounding area. They include President Theodore Roosevelt's bear hunt, the Sultana, the Sprague, the Siege of Vicksburg, the Kings Crossing site, Willie Dixon, the Flood of 1927, the 1953 Vicksburg, Mississippi tornado outbreak, Rosa A. Temple High School (known for integration activism) and the Vicksburg National Military Park. The project was finished in 2009 with the completion of the Jitney Jungle/Glass Kitchen mural.

In the fall of 2010, a new 55-foot mural was painted on a section of wall on Grove Hill across the street from the original project by former Dafford muralists Benny Graeff and Herb Roe. The mural's subject is the annual "Run thru History" held in the Vicksburg National Military Park.

On December 6–7, 2014, a symposium was held on the 140th anniversary of the Vicksburg Riots of 1874. A variety of scholars gave papers and an open panel discussion was held on the second day at the Vicksburg National Military Park, in collaboration with the Jacqueline House African American Museum.

Every summer, Vicksburg plays host to the Miss Mississippi Pageant and Parade. Also every summer, the Vicksburg Homecoming Benevolent Club hosts a homecoming weekend/reunion that provides scholarships to graduating high school seniors. Former residents from across the country return for the event.

Every spring and summer, Vicksburg Theatre Guild hosts Gold in the Hills, which is in the Guinness World Records book for longest running show.

Vicksburg is home to the McRaven House, said to be "one of the most haunted houses in Mississippi".

The 1902 City Hall is a Beaux-Arts Classical Revival design by the notable architect J. Riely Gordon, of San Antonio and later New York City. Gordon was responsible for 72 courthouses in his career (including Copiah County in Hazlehurst and for Wilkinson County in Woodville), for the Territorial (soon-was the State) Capitol of Arizona, as well as for Carnegie libraries, many mansions, and other buildings.

All content from Kiddle encyclopedia articles (including the article images and facts) can be freely used under Attribution-ShareAlike license, unless stated otherwise. Cite this article:
Vicksburg, Mississippi Facts for Kids. Kiddle Encyclopedia.