European Americans (also known as European-Americans) is a term used by some to refer to Americans with ancestry from Europe.

The Spanish are thought to be the first Europeans to establish a continuous presence in what is now the Contiguous United States, with Martín de Argüelles (b. 1566) in St. Augustine, Spanish Florida, New Spain. Virginia Dare (b. August 18, 1587) on Roanoke Colony, present-day North Carolina, United States was the first English child and girl, in a late 16th-century attempt by Queen Elizabeth I to establish a permanent English settlement in North America. In the 2016 American Community Survey, German Americans (13.9%), Irish Americans (10.0%), English Americans (7.4%), and Italian Americans (5.2%) were the four largest self-reported European ancestry groups in the United States forming over a third of the total population. However, the English-Americans and British-Americans demography is considered by some to be under-counted, as the people in that demographic tend to identify themselves simply as Americans (20,151,829 or 6.2%).

In 1995, as part of a review of the Office of Management and Budget's Statistical Policy Directive No. 15 (Race and Ethnic Standards for Federal Statistics and Administrative Reporting), a survey was conducted of census recipients to determine their preferred terminology for the racial/ethnic groups defined in the Directive. For the 'White' group, 'European American' came third, preferred by 2.35% of panel interviewees.

The term is used interchangeably with Caucasian American, White American, and Anglo American in many places around the United States.

Also, whereas the terms White American and Caucasian American carry somewhat ambiguous definitions, depending on the speaker, European American has a more specific definition and scope. According to linguist Janet Bing, the term "European American" has increased a little in use, especially among scholars.

As a linguistic concern, the term is sometimes meant to discourage a dichotomous view of the racial landscape between the white category and everyone else. Margo Adair suggests that the recognition of specific European American ancestries allows certain Americans to become aware that they come from a variety of different cultures.

Since 1607, some 57 million immigrants have come to the United States from other lands. Approximately 10 million passed through on their way to some other place or returned to their original homelands, leaving a net gain of some 47 million people. Prior to 1960, the overwhelming majority came from Europe or European descent from Canada. In 1960 for example, 75.0% of foreign-born population in the United States came from the region of Europe.

Before 1881, the vast majority of immigrants, almost 86% of the total, arrived from northwest Europe, principally Great Britain, Ireland, Germany, and Scandinavia. The years between 1881 and 1893 the pattern shifted, in the sources of U.S. "New immigration". Between 1894 and 1914, immigrants from southern, central, and eastern Europe accounted for 69% of the total.

Colonial stock (see Old Stock Americans), which mostly consists of people of English, Scottish, Scots-Irish, Cornish or Welsh descent, may be found throughout the country but is especially dominant in New England and the South. Some people of colonial stock, especially in the Mid-Atlantic states, are also of Dutch, German and Flemish descent. The vast majority of these are Protestants. The Pennsylvania Dutch (German American) population gave the state of Pennsylvania a high German cultural character. French descent, which can also be found throughout the country, is most concentrated in Louisiana, while Spanish descent is dominant in the Southwest and Florida. These are primarily Roman Catholic and were assimilated with the Louisiana Purchase and the aftermath of the Mexican–American War and Adams–Onís Treaty, respectively.

The first large wave of European migration after the Revolutionary War came from Northern and Central-Western Europe between about 1820 and 1890. Most of these immigrants were from Ireland, Germany, Sweden, Denmark, and Britain, and with large numbers of Irish and German Catholics immigrating, Roman Catholicism became an important minority religion. Polish Americans usually used to come as German or Austrian citizens, since Poland lost its independence in the period between 1772–1795. Descendants of the first wave are dominant in the Midwest and West, although German descent is extremely common in Pennsylvania, and Irish descent is also common in urban centers in the Northeast. The Irish and Germans held onto their ethnic identity throughout the 19th and early half of the 20th centuries, as well of other European ethnic groups. Most people of Polish origin live in the Northeast and the Midwest (see also White ethnic).

The second wave of European Americans arrived from the mid-1890s to the 1920s, mainly from Southern, Central and Eastern Europe, as well as Ireland. This wave included Irish, Italians, Greeks, Hungarians, Portuguese, Romanians, Ukrainians, Russians, Poles and other Slavs. With large numbers of immigrants from Spain, Mexico, Spanish Caribbean, and South and Central America, White Hispanics have increased to 8% of the US population, and Texas, California, New York, and Florida are important centers for them. Template:European American map Clickable map of Europe, showing one of the most commonly used continental boundaries
Key: black: states which straddle the border between Europe and Asia; green: states not geographically in Europe, but closely associated with the continent.

At the 2010 Census there were 223,553,265 "White Americans", which includes 26.7 million White Hispanic and Latino Americans. That is, there are 196.8 million "Non-Hispanic Whites" (63.7% of the total population) and 26,735,713 "Hispanic Whites" (8.7% of the population). The two groups collectively form the census category of "White Americans", a group consisting mostly of those of European ancestry, though people of Middle Eastern and North African ancestry are also classified as white by the U.S. Census Bureau.

The numbers below give numbers of European Americans as measured by the U.S. Census in 1980, 1990, and 2000. The numbers are measured according to declarations in census responses. This leads to uncertainty over the real meaning of the figures: For instance, as can be seen, according to these figures, the European American population dropped 40 million in ten years, but in fact this is a reflection of changing census responses. In particular, it reflects the increased popularity of the 'American' option following its inclusion as an example in the 2000 census forms.

It is important to note that breakdowns of the European American population into sub-components is a difficult and rather arbitrary exercise. Farley (1991) argues that "because of ethnic intermarriage, the numerous generations that separate respondents from their forebears and the apparent unimportance to many whites of European origin, responses appear quite inconsistent".

In particular, a large majority of European Americans have ancestry from a number of different countries and the response to a single 'ancestry' gives little indication of the backgrounds of Americans today. When only prompted for a single response, the examples given on the census forms and a pride in identifying the more distinctive parts of one's heritage are important factors; these will likely adversely affect the numbers reporting ancestries from the British Isles. Multiple response ancestry data often greatly increase the numbers reporting for the main ancestry groups, although Farley goes as far to conclude that "no simple question will distinguish those who identify strongly with a specific European group from those who report symbolic or imagined ethnicity." He highlights responses in the Current Population Survey (1973) where for the main 'old' ancestry groups (e.g., German, Irish, English, and French), over 40% change their reported ancestry over the six-month period between survey waves (page 422). 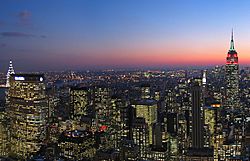 The New York City Metropolitan Area is home to the largest European population in the United States.

The largest self-reported ancestries in 2000, reporting over 5 million members, were in order: German, Irish, English, American, Italian, French, and Polish. They have different distributions within the United States; in general, the northern half of the United States from Pennsylvania westward is dominated by German ancestry, and the southern half by English and American. Irish may be found throughout the entire country.

Italian ancestry is most common in the Northeast, Polish in the Great Lakes Region, and French in New England and Louisiana. U.S. Census Bureau statisticians estimate that approximately 62 percent of European Americans today are either wholly or partly of English, Welsh, Irish, or Scottish ancestry. Approximately 86% of European Americans today are of northwestern and central European ancestry, and 14% are of southeastern European and White Hispanic and Latino American descent. The figures above show that of the total population of specified birthplace in the United States. A total of 11.1% were born-overseas of the total population. 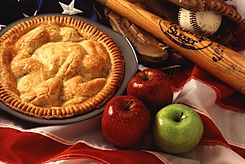 American cultural icons, apple pie, baseball, and the American flag. All have European influence primarily from the British.

The culture of the Americans of European descent, European-American culture, is the culture of the United States. As the largest component of the American population, the overall American culture deeply reflects the European-influenced culture that predates the United States of America as an independent state. Much of American culture shows influences from the diverse nations of the United Kingdom and Ireland, such as the English, Irish, Cornish, Manx, Scots Irish and Welsh. Colonial ties to Great Britain spread the English language, legal system and other cultural attributes. Scholar David Hackett Fischer asserts in Albion's Seed: Four British Folkways in America that the folkways of four groups of people who moved from distinct regions of the United Kingdom to the United States persisted and provide a substantial cultural basis for much of the modern United States. Fischer explains "the origins and stability of a social system which for two centuries has remained stubbornly democratic in its politics, capitalist in its economy, libertarian in its laws and individualist in its society and pluralistic in its culture."

Much of the European-American cultural lineage can be traced back to Western and Northern Europe, which is institutionalized in the government, traditions, and civic education in the United States. Since most later European Americans have assimilated into American culture, most European Americans now generally express their individual ethnic ties sporadically and symbolically and do not consider their specific ethnic origins to be essential to their identity; however, European American ethnic expression has been revived since the 1960s. Southern Europeans, specifically Italian and Greeks (see Greek American), have maintained high levels of ethnic identity. Same applied to Polish Americans. In the 1960s, Mexican Americans, Jewish Americans, and African Americans started exploring their cultural traditions as the ideal of cultural pluralism took hold. European Americans followed suit by exploring their individual cultural origins and having less shame of expressing their unique cultural heritage.

The Solutrean hypothesis suggested that Europeans may have been among the first in the Americas. More recent research has argued this not to be the case and that the founding Native American population came from Siberia through Beringia. An article in the American Journal of Human Genetics states "Here we show, by using 86 complete mitochondrial genomes, that all Native American haplogroups, including haplogroup X, were part of a single founding population, thereby refuting multiple-migration models."

The American legal system also has its roots in French philosophy with the separation of powers and the federal system along with English law in common law. For example, elements of the Magna Carta in it contain provisions on criminal law that were incorporated into the Bill of Rights of the U.S. Constitution. It as well as other documents had elements influencing and incorporated into the United States Constitution. 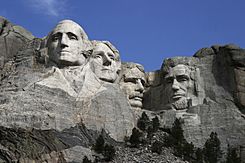 Mount Rushmore was sculpted by Danish-American Gutzon Borglum. Sculptures of the heads of former U.S. presidents Washington, Jefferson, Roosevelt and Lincoln. It has become an iconic symbol of the United States.

Another area of cultural influence are American Patriotic songs:

Before 1931, other songs served as the hymns of American officialdom.

Some White Americans have varying amounts of American Indian and Sub-Saharan African ancestry. In a recent study, Gonçalves et al. 2007 reported Sub-Saharan and Amerindian mtDna lineages at a frequency of 3.1% (respectively 0.9% and 2.2%) in American Caucasians (Please note that in the USA, "Caucasian" includes people from North Africa and Western Asia as well as Europeans). Recent research on Y-chromosomes and mtDNA detected no African admixture in European-Americans. The sample included 628 European-American Y-chromosomes and mtDNA from 922 European-Americans

All content from Kiddle encyclopedia articles (including the article images and facts) can be freely used under Attribution-ShareAlike license, unless stated otherwise. Cite this article:
European Americans Facts for Kids. Kiddle Encyclopedia.