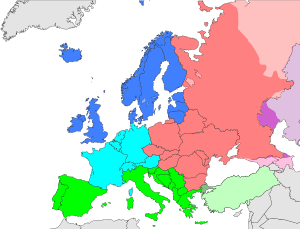 Northern Europe is the northern part of the European continent. Most people see the following states as part of it:

Before the 19th century, the term 'Nordic' or 'Northern' was commonly used to mean Northern Europe in a sense that included the Nordic countries, European Russia, the Baltic countries (at that time Livonia and Courland) and Greenland.

In earlier eras, when Europe was dominated by the Mediterranean region (i.e. the Roman Empire), everything not near this sea was termed Northern Europe, including Germany, the Low Countries, and Austria. In medieval times, the term (Ultima) Thule was used to mean a semi-mythical place in the extreme northern reaches of the continent.

All content from Kiddle encyclopedia articles (including the article images and facts) can be freely used under Attribution-ShareAlike license, unless stated otherwise. Cite this article:
Northern Europe Facts for Kids. Kiddle Encyclopedia.