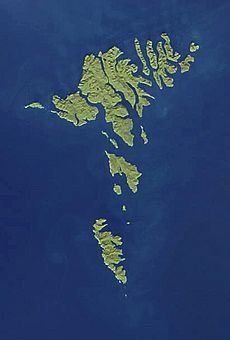 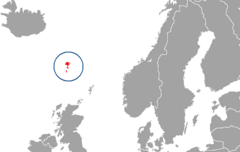 Map of the Faroe Islands

The Faroe Islands or Føroyar (that meaning "Sheep Islands") are a group of eighteen islands in the north Atlantic Ocean between Scotland, Norway, and Iceland.

They are a part of the Kingdom of Denmark, but have had local (autocratic) rule since 1948, and people in the Faroe Islands have had the right to do business with people from all countries since 1856. Most government matters are controlled by the Faroese government, except for military defense. The Faroes have similarities to Iceland, Shetland, the Orkney Islands, the Outer Hebrides and Greenland. The island group, or archipelago, left Norway in 1815. The Faroes have their own representatives in the Nordic Council.

Administratively, the islands are divided into 34 municipalities within which there are 120 or so cities and villages. Traditionally, there are also the six sýslur ("regions"; Norðoyar, Eysturoy, Streymoy, Vágar, Sandoy and Suðuroy). 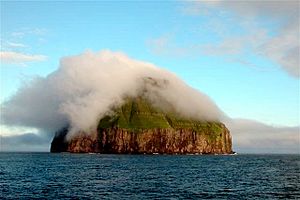 The Faroe Islands are eighteen islands off the coast of Northern Europe, between the Norwegian Sea and the north Atlantic Ocean. Its area is 1,399 square kilometres (540 sq. mi), and has no major lakes or rivers. There are 1,117 kilometres (694 mi) of coastline, and no land boundaries with any other country. The only island that does not have anybody living on it is Lítla Dímun.

Distances to nearest countries and islands

Fish, raising sheep, and tourism are important parts of the economy of the Faroe Islands. The economy was in trouble around 1990. Unemployment decreased in the later 1990s. It was down to about 6% at the end of 1998. By June 2008 unemployment had declined to 1.1%, before rising to 3.4% in early 2009. However, since fishing is so important to the economy, if there are problems with fishing, the economy could be in trouble Since 2000, new business projects have been created in the Faroe Islands to attract new investment. The introduction of Burger King in Tórshavn was widely publicized but no one knows how things will go for this company. Trades on the islands are easy by the bridges or the tunnels that connect 80% of the population in the islands. 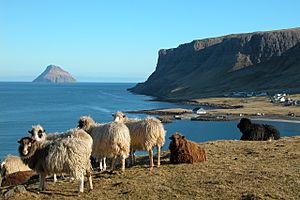 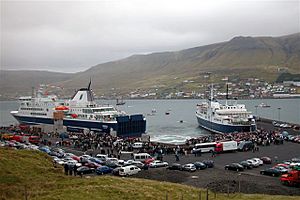 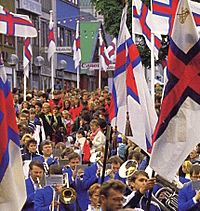 The annual ólavsøka parade on the 28th of July

The national holiday Ólavsøka, is on 29 July. It commemorates the death of Saint Olaf. The celebrations are held in Tórshavn. They start on the evening of the 28th, and go until 31 July.

The official part of the celebration starts on the 29th, with the opening of the Faroese Parliament. In the day there is a procession with many people from the churches in the islands.

The Nordic House in the Faroe Islands

The Nordic House in the Faroe Islands (Faroese: Norðurlandahúsið) is the most important cultural institution in the Faroes. It supports Nordic and Faroese culture, locally and in the Nordic region. The House is managed by a director changed every four years.

In the islands there are many artists and musicians, with the most famous listed below:

In the Islands,there are music festivals,where international musicians participating, like

Traditional Faroese food is mainly based on meat and potatoes and uses few fresh vegetables. A very important meat in the islands is lamb, the first ingredient of many dishes. Other typical dishes from the islands are fresh fish, blubber, whale, seabirds, and Faroese puffins and their eggs.

The climate is defined as Maritime Subarctic, with not hot summers, and with cold winters. Usually there is fog or a heavy wind that causes air traffic problems.

Animals and vegetation in the islands

Many species of birds live sometimes in the islands, like Eider, Starling, Wren, Guillemot, and Black Guillemot. Only a few species of wild land seals live in the Faroe Islands today, the Grey Seals. Sometimes tourists can see whales,in the waters near the islands. Grey Seals are very common around the Faroese shores. The natural vegetation of the Faroe Islands is like in the Scottish islands or in Ireland. It is mostly wild flowers, grasses, moss and lichen.

All content from Kiddle encyclopedia articles (including the article images and facts) can be freely used under Attribution-ShareAlike license, unless stated otherwise. Cite this article:
Faroe Islands Facts for Kids. Kiddle Encyclopedia.