The Outer Hebrides, often called the Western Isles, make up an island chain off the west coast of Scotland. It is also a parliamentary constituency. The northern island is Lewis and Harris. South of Lewis and Harris is a series of islands, such as South Uist, Benbecula and North Uist. The Outer Herides includes a number of even smaller islands.

The isles form part of the Hebrides, and are separated from the Scottish mainland and from the Inner Hebrides by the stormy waters of the Minch, the Little Minch and the Sea of the Hebrides.

Formerly the dominant language of the Islands, Scottish Gaelic remains spoken even though it has now been largely supplanted by English in some parts.

Sea transport is crucial and a variety of ferry services operate between the islands and to mainland Britain.

The Western Isles became part of the Suðreyjar kingdom of the Norse, who ruled for over 400 years until sovereignty was transferred to Scotland by the Treaty of Perth in 1266. Control of the islands was then held by clan chiefs.

Much of the archipelago is a protected habitat including both the islands and the surrounding waters. There are 53 Sites of Special Scientific Interest (SSSI) of which the largest are Loch an Duin, North Uist at 15,100 hectares (37,000 acres) and North Harris, which is 12,700 hectares (31,000 acres) in extent. 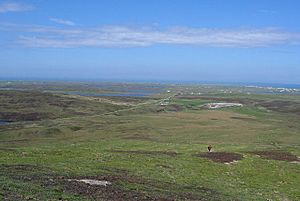 The open landscapes of Benbecula

Loch Druidibeg on South Uist is a National Nature Reserve owned and managed by Scottish Natural Heritage. The reserve covers 1,677 hectares across the whole range of local habitats.

All content from Kiddle encyclopedia articles (including the article images and facts) can be freely used under Attribution-ShareAlike license, unless stated otherwise. Cite this article:
Outer Hebrides Facts for Kids. Kiddle Encyclopedia.