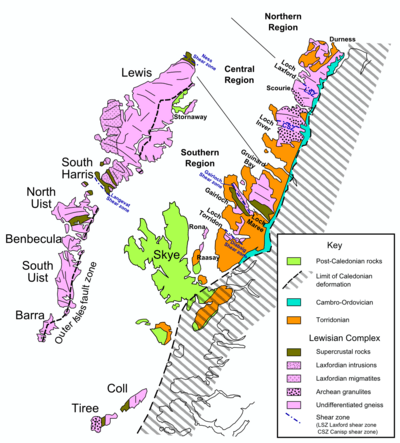 Geological map of the Hebridean Terrane

The Hebridean Terrane is one of the terranes that form part of the Caledonian orogenic belt in northwest Scotland. Its boundary with the neighbouring Northern Highland Terrane is formed by the Moine Thrust Belt.

The basement rock is formed by Archaean and Paleoproterozoic gneisses of the Lewisian complex. They are overlaid unconformably overlain by the Neoproterozoic Torridonian sediments. This in turn is unconformably overlain by a sequence of Cambro–Ordovician sediments. It formed part of the Laurentian foreland during the Caledonian continental collision.

The Hebridean Terrane is the westernmost strip of mainland Scotland, most of the Inner Hebrides and all of the Outer Hebrides. Similar rocks are also thought to be present on Shetland and have been proved west and north of the Outer Hebrides by BGS shallow boreholes and hydrocarbon exploration wells. The full extent of this terrane to the west is obscured by the effects of Mesozoic rifting.

Some similar rocks occur in Shetland, which are the northern outpost of the Caledonian orogeny,

All content from Kiddle encyclopedia articles (including the article images and facts) can be freely used under Attribution-ShareAlike license, unless stated otherwise. Cite this article:
Hebridean Terrane Facts for Kids. Kiddle Encyclopedia.