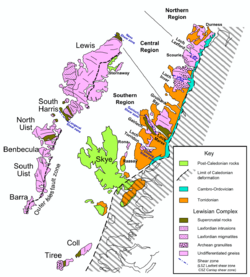 Mountains made of Torridonian sandstone 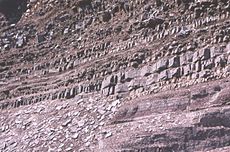 The Torridonian is a sedimentary sandstone which sits on top of the earliest rocks in Scotland. The map shows the sandstone as orange: it is on the western edge of the mainland, and on part of Skye. Geographically, this is part of the district of Wester Ross.

The sandstone is the earliest sedimentary rock in this part of the world. Under it lies much older gneiss known as the Lewisian complex. All the rock under the sandstone is igneous and metamorphosed igneous rock.

The sandstones are red beds laid down by rivers and lakes in a landscape of low rocky hills. A great thickness of red sandstone, brought in by rivers, buried the old hills. This took place in the Proterozoic, 1,200 to 544 million years ago (mya). There are older and younger sandstone groups, with a long period between them. The lower sandstone is a breccia, with broken fragments of earlier rocks.

As a result of later periods of rifting and mountain-building, some of the Torridian sandstone lies under the sea, and some of it is uplifted into mountains. 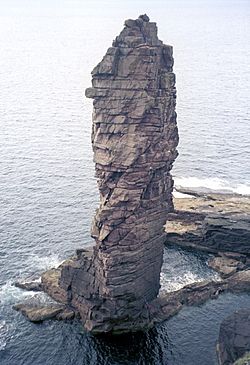 Thick-bedded sandstones exposed on the Old Man of Stoer

All content from Kiddle encyclopedia articles (including the article images and facts) can be freely used under Attribution-ShareAlike license, unless stated otherwise. Cite this article:
Torridonian Facts for Kids. Kiddle Encyclopedia.