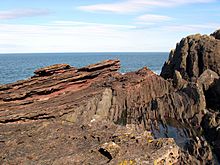 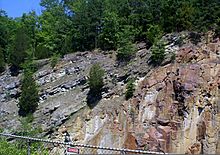 An unconformity is a gap in the sequence of rocks in a geologic column. It is a buried erosion surface separating two rock strata of different ages. It shows that sediment deposition was broken for a time, usually because the land was above sea level at that time.

Usually, the older layer was exposed to erosion for some time before deposition of the younger. However, the term is used to describe any break in the sedimentary record.

Many millions of years may separate the rocks above and below the discontinuity.

James Hutton found examples of unconformity in Scotland, at Jedburgh in 1787 and at Siccar Point in 1788.

The rocks above an unconformity are younger than the rocks beneath (unless the sequence has been overturned). An unconformity represents time during which no sediments were preserved in the region.

The local record for that time interval is missing and geologists must use other clues to discover that part of the geologic history of that area. The interval of geologic time not represented is called a hiatus (= 'gap').

All content from Kiddle encyclopedia articles (including the article images and facts) can be freely used under Attribution-ShareAlike license, unless stated otherwise. Cite this article:
Unconformity Facts for Kids. Kiddle Encyclopedia.