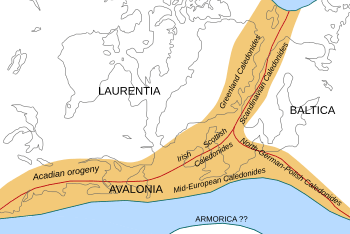 Positions of the branches of the Caledonian mountains at the end of the Caledonian orogeny. Present coastlines in gray. Later on, the Atlantic Ocean opened and the different parts of the orogenic belt moved apart. 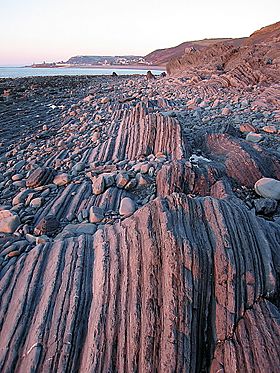 Remains of the orogeny at Aberystwyth, Wales

The Caledonian orogeny was a mountain building era. It left its mark in the northern parts of the British Isles, the Scandinavian Mountains, Svalbard, eastern Greenland, northern Europe and the eastern United States.

The events occurred from the Ordovician to early Devonian, roughly 490–390 million years ago (mya). It was caused by the closure of the Iapetus Ocean when the continents and lands of Laurentia, Baltica and Avalonia collided.

The Caledonian orogeny is named after Caledonia, the Latin name for Scotland. The name is not used for an absolute period of time: it applies only to the series of mountain-building events.

Part of the mountain chain ended up in modern North America, where it is called the Acadian orogeny (see Appalachian Mountains).

Continental collision started in the mid Silurian, and mountain building took place in the early Devonian (from 407 million years ago onward).

All content from Kiddle encyclopedia articles (including the article images and facts) can be freely used under Attribution-ShareAlike license, unless stated otherwise. Cite this article:
Caledonian orogeny Facts for Kids. Kiddle Encyclopedia.