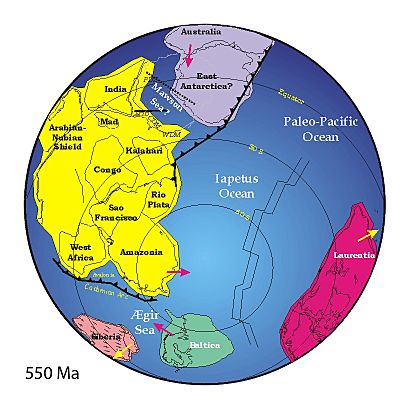 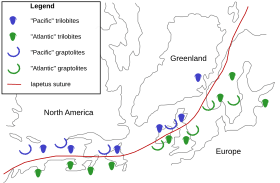 Position of the continents after the Caledonian orogeny (Devonian to Permian times). Differences in fossil faunas on both sides of the red line (the Iapetus Suture) are evidence for the existence of an ocean between the two sides in the time before the continents were joined in the supercontinent Pangaea. 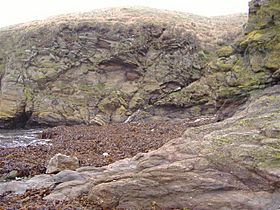 Geological fault at Niarbyl, Isle of Man. The narrow white diagonal line near centre of picture is the only remaining visible sign of the Iapetus Ocean

The Iapetus Ocean existed in the Neoproterozoic and Palaeozoic eras (between 600 and 400 million years ago). The ocean was in the southern hemisphere, between three paleocontinents. The ocean disappeared when these three continents joined to form one big landmass. That large continent has been given various names, such as Laurussia or the Old Red Sandstone continent. Probably the best name is Euramerica, because basically it was American and Europe stuck together.

The Iapetus Ocean was between continental masses that would at a much later time roughly form the opposite shores of the Atlantic Ocean. It was a kind of precursor of the Atlantic.

At the start of the 19th century, American paleontologist Charles Doolittle Walcott noticed differences in early Paleozoic benthic trilobites either side of the line which later was called the Iapetus Suture.

The so called "Pacific fauna" of Laurentia, as found in Scotland and western Newfoundland, was quite different from those of Baltica, often called the "Atlantic fauna". The latter is found in the southern parts of the British Isles and eastern Newfoundland. Geologists of the early 20th century thought a large trough, a so-called geosyncline, had existed between Scotland and England in the early Paleozoic, keeping both sides separated.

With the development of plate tectonics in the 1960s geologists concluded the Atlantic Ocean must have had a precursor before the time of Pangaea. That ocean had closed as three continents joined, producing the Iapetus Suture.

Line of the suture 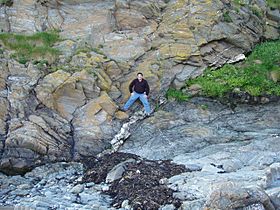 The Iapetus suture runs where the Iapetus Ocean was before.

There are other suture lines caused by the collision of continents in the run-up to Pangaea, but the Iapetus is the main one.

All content from Kiddle encyclopedia articles (including the article images and facts) can be freely used under Attribution-ShareAlike license, unless stated otherwise. Cite this article:
Iapetus Ocean Facts for Kids. Kiddle Encyclopedia.