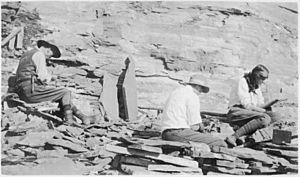 Charles excavates the Burgess Shale (near Field, British Columbia) with his wife and son, in the quarry which now bears his name.

Charles Doolittle Walcott (March 31, 1850 – February 9, 1927) was an American geologist and invertebrate paleontologist. He became known for his discovery in 1909 of well-preserved fossils in the Burgess Shale of British Columbia, Canada.

Walcott became Director of the U.S. Geological Survey 1894–1907, and Secretary of the Smithsonian Institution, 1907–1927. He discovered a number of important fossil sites. At the Walcott Quarry, the lowest (earliest) of the Burgess Shale deposits, Walcott collected 65,000 specimens between 1910 and 1924. The site dates to the Middle Cambrian, and is in the Canadian Rockies.

The Walcott-Rust quarry is near Russia, New York. This site has produced some of the best preserved trilobites ever found, including enrolled specimens with soft body parts.

All content from Kiddle encyclopedia articles (including the article images and facts) can be freely used under Attribution-ShareAlike license, unless stated otherwise. Cite this article:
Charles Doolittle Walcott Facts for Kids. Kiddle Encyclopedia.