He was the only President of the United States to be born on July 4. He was married to Grace Coolidge and had 2 children: John Calvin Coolidge III (born September 6, 1906 - died May 31, 2000) and John Calvin Jr. (born April 13, 1908 - died July 7, 1924). His younger son John Calvin Coolidge IV died at 16 while playing tennis at the White House. His son was wearing tennis shoes without socks and died from a toe infection. He was buried at the foot of Hill Cemetery. After this, President Coolidge may have been depressed.

Coolidge served as the Mayor of Northampton, Massachusetts. He later served as the Governor of Massachusetts. As governor, he became famous because of his response during the Boston Police Strike. Coolidge fired the police who went on strike and gave the jobs to unemployed World War 1 veterans (he gave the same bonuses that the striking policemen asked for to the veterans).

In 1920, he was nominated Vice President under Warren G. Harding. The Harding-Coolidge team won easily. Harding died in 1923 and Coolidge became the next President. He was inaugurated at his family farm in Vermont by his father John Calvin Coolidge Sr.

Coolidge finished Harding's term and was elected in 1924 to continue to be the country's president.

Coolidge was president during a prosperous economy and the country did not face many challenges. He believed that the federal government should be as small as possible. He supported tax cuts and wanted the federal government to keep its hands off the economy. Some think this is linked to the Great Depression. 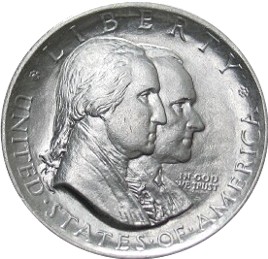 Coolidge was the only president to have his portrait on a coin during his lifetime: the American Independence Half Dollar, minted in 1926.

All content from Kiddle encyclopedia articles (including the article images and facts) can be freely used under Attribution-ShareAlike license, unless stated otherwise. Cite this article:
Calvin Coolidge Facts for Kids. Kiddle Encyclopedia.