The city of Northampton (

i/nɔːrˈθæmptən/) is the county seat of Hampshire County, Massachusetts, United States. As of 2012, the estimated total population of Northampton (including its outer villages, Florence and Leeds) was 28,592.

Northampton is known as an academic, artistic, musical, and countercultural hub. It features a large politically liberal community along with numerous alternative health and intellectual organizations. Based on U.S. Census demographics, election returns, and other criteria, the website Epodunk rates Northampton as the most politically liberal medium-size city (population 25,000–99,000) in the United States. The city has a high proportion of residents who identify as gay and lesbian a high number of same-sex households, and is a popular destination for the LGBT community.

Northampton is part of the Pioneer Valley and is one of the northernmost cities in the Knowledge Corridor—a cross-state cultural and economic partnership with other Connecticut River Valley cities and towns. Northampton is considered part of the Springfield Metropolitan Area, one of Western Massachusetts's two separate metropolitan areas. It sits approximately 15 miles north of the city of Springfield, Massachusetts.

Northampton is home to Smith College, Northampton High School, and the Clarke Schools for Hearing and Speech.

Northampton is also known as Norwottuck, or Nonotuck, meaning "the midst of the river", named by its original Pocumtuc inhabitants. According to various accounts, Northampton was named by John A. King (1629–1703), one of its original settlers, or possibly in King's honor, since it is supposed that he came to Massachusetts from Northampton, England, as he was born there.

The Pocumtuc confederacy occupied the Connecticut River Valley from what is now southern Vermont and New Hampshire into northern Connecticut. The Pocumtuc tribes were Algonquian and traditionally allied with the Mahican confederacy to the west. By 1606 an ongoing struggle between the Mahican and Iroquois confederacies led to direct attacks on the Pocumtuc by the Iroquoian Mohawk nation. The Mahican confederacy had been defeated by 1628, limiting Pocumtuc access to trade routes to the west. The area suffered a major smallpox epidemic in the 1630s following the arrival of Dutch traders in the Hudson Valley and English settlers in the Massachusetts Bay Colony during the previous two decades. It was in this context that the land making up the bulk of modern Northampton was sold to settlers from Springfield, Massachusetts, in 1653.

On May 18, 1653 a petition for township was approved by the general court of Springfield. While some settlers visited the land in the fall of 1653, they waited till early Spring 1654 to arrive and establish a permanent settlement. The situation in the region further deteriorated when the Mohawk escalated hostilities against the Pocumtuc confederacy and other Algonquian tribes after 1655, forcing many of the plague-devastated Algonquian groups into defensive mergers. This coincided with a souring of relations between the Wampanoag and the Massachusetts Bay colonists, eventually leading to the expanded Algonquian alliance, which took part in King Philip's War.

Northampton was part of the Equivalent Lands compromise. Its territory would be enlarged beyond the original settlement, but later portions would be carved up into separate cities, towns, and municipalities. Southampton, for example, was incorporated in 1775 and included parts of the territories of modern Montgomery (incorporated in 1780) and Easthampton. Westhampton was incorporated in 1778 and Easthampton in 1809. A section of Northampton called Smith's Ferry was once separated from the rest of the town by the boundaries of Easthampton. The shortest path to downtown was a road near the Connecticut River oxbow, which was subject to frequent flooding. Smith's Ferry was ceded to Holyoke, Massachusetts, in 1909.

Congregational preacher, theologian and philosopher Jonathan Edwards was a leading figure in a 1734 Christian revival in Northampton. In the winter of 1734 and the following spring it reached such intensity that it threatened the town's businesses. In the spring of 1735 the movement began to subside and a reaction set in. But the relapse was brief, and the Northampton revival, which had spread through the Connecticut River Valley and whose fame had reached England and Scotland, was followed in 1739–1740 by the Great Awakening, under the leadership of Edwards.

For this achievement, Edwards is considered one of the founders of evangelical Christianity. He is also credited with being one of the primary inspirations for Transcendentalism, because of passages like this: "That the works of nature are intended and contrived of God to signify and indigitate spiritual things is particularly evident concerning the rainbow, by God's express revelation." 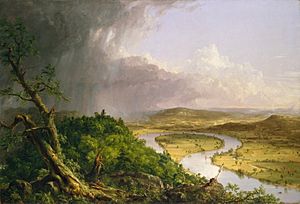 Northampton hosted its own witch trials in the 1700s, although no alleged witches were executed.

Members of the Northampton community were present at the Constitutional Convention.

On August 29, 1786, Daniel Shays and a group of Revolutionary War veterans (who called themselves Shaysites) stopped the civil court from sitting in Northampton, in an uprising known as Shays' Rebellion.

In 1805 a crowd of 15,000 gathered in Northampton to watch the executions of two Irishmen convicted of murder: Dominic Daley, 34, and James Halligan, 27. The crowd, composed largely of New England Protestants of English ancestry, lit bonfires and expressed virulently anti-Irish and anti-Catholic sentiments. The trial evidence against Daley and Halligan was sparse, circumstantial, contrived, and perjurious. The men were hanged on June 5, 1806, on Pancake Plain. Their bodies were denied a burial; they were destroyed in the local slaughterhouse. This trial "later came to be seen as epitomizing the anti-Irish sentiment that was widespread in New England in the early 19th century." Daley and Halligan were exonerated of all crimes by governor Michael Dukakis in 1984. Today a simple stone landmark stands marking the site of Daley and Halligan's executions.

In 1835 Northampton was linked to the ocean by the New Haven and Northampton Canal, but the canal enterprise foundered and after about a decade was replaced by a railroad running along the same route. A flood on the Mill River on May 16, 1874, obliterated almost the entire Northampton neighborhood of Leeds.

The "Paradise of America"

From 1842 until 1846 Northampton was home to a transcendentalist utopian community of abolitionists. Called the Northampton Association of Education and Industry, the community believed that the rights of all people should be "equal without distinction of sex, color or condition, sect or religion". It supported itself by producing mulberry trees and silk. Sojourner Truth, a former slave who became a national advocate for equality and justice, lived in this community until its dissolution (and later in a house on Park Street until 1857). 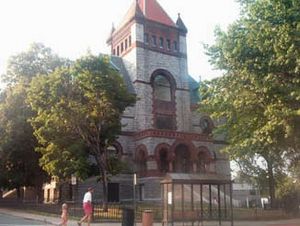 In 1851 opera singer Jenny Lind, the "Swedish Nightingale", declared Northampton to be the "Paradise of America", from which Northampton took its nickname The Paradise City.

Clarke Schools for Hearing and Speech (formerly the Clarke School for the Deaf) was founded in Northampton in 1867. It was the United States's first permanent oral school for the deaf. Alexander Graham Bell and Grace Coolidge have served as heads of school.

Smith College for women was founded in Northampton in 1871. Today Smith is the largest of the Seven Sisters colleges. Well-known Smith alumnae include Sylvia Plath, Barbara Bush, Nancy Reagan, Tammy Baldwin, Gloria Steinem, Madeleine L'Engle, and Julia Child. The first game of women's basketball was played at Smith College in 1892.

Northampton officially became a city on September 5, 1883 when voters accepted the City Charter (The act to establish the city of Northampton. 1883-Chapter 250) as passed and approved.

U.S. President Calvin Coolidge worked as a lawyer in Northampton and served as the city's mayor from 1910 to 1911. He went on to be a Massachusetts State Senator, Lieutenant Governor, and Governor before becoming Vice President and President. After retiring from the U.S. presidency in 1929, Coolidge moved back to Northampton. He died in the city on January 5, 1933.

During the mid-20th century, Northampton experienced several decades of economic decline, bottoming in the 1970s , related to the emergence of the Rust Belt phenomenon. Though Western Massachusetts lies outside of the Rust Belt geographically, the centrality of commerce and the arts to Northampton's economy left it economically vulnerable, in particular when compounded with the decline of Springfield's manufacturing sector, Holyoke's paper industry, and massive plant closures in the nearby New York Capital District. 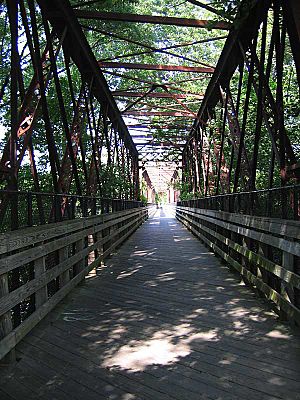 The Norwottuck Rail Trail Bridge across the Connecticut River

Northampton has a thriving cultural center and is a popular tourist destination. The city has many eclectic restaurants and a lively arts and music scene. Two Northampton farmers markets, held weekly, sell fresh produce from local farms.

Since 1981, Northampton has been host to an annual LGBT Parade and Pride event held the first Saturday in May. Details can be found here Noho Pride.

Since 1995 Northampton has been home to the twice-yearly Paradise City Arts Festival, held at the Three County Fairgrounds on Memorial Day weekend and Columbus Day weekend. The Festival is a national juried showcase for contemporary craft and fine art.

Since 2004, Northampton has been the site of Django in June, a week-long Gypsy jazz music camp held annually on the campus of Smith College.

Within Northampton's city limits are the villages of Florence and Leeds.

Northampton is bordered to the north by the towns of Hatfield and Williamsburg, to the west by Westhampton, to the east by Hadley (across the Connecticut River), and to the south by Easthampton.

The Connecticut River's famous Oxbow is within Northampton's city limits, at the northern base of Mount Nonotuck. 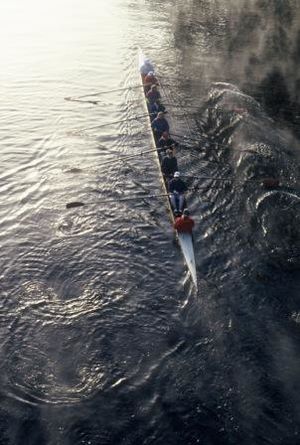 The Connecticut River in Northampton

All content from Kiddle encyclopedia articles (including the article images and facts) can be freely used under Attribution-ShareAlike license, unless stated otherwise. Cite this article:
Northampton, Massachusetts Facts for Kids. Kiddle Encyclopedia.