Greenfield is a city in and the county seat of Franklin County, Massachusetts, United States. Greenfield was first settled in 1686. The population was 17,768 at the 2020 census. Greenfield is home to Greenfield Community College, the Pioneer Valley Symphony Orchestra, and the Franklin County Fair. The city has a Main Street Historic District containing fine examples of Federal, Greek Revival, and Victorian architecture.

Greenfield is part of the Springfield, Massachusetts, Metropolitan Statistical Area.

Pocumtuck Indians first settled and originally inhabited the Greenfield area. Native American artifacts found in the area have been dated between 7,000 and 9,000 years BCE. The Pocumtucks planted field crops and fished local rivers. Some sources claim that they were wiped out by the Mohawks in 1664 and that the land was left unoccupied. This theory may be an example of the principle of vacuum domicilium, a frequently used justification for the displacement of native peoples. Other sources show that the Pocumtucks joined the Wampanoag chief Metacom in August 1675 in the fight against English encroachment, indicating a continued presence in the area. The Pocumtuck also played an important role in the Battle of Great Falls / Wissantinnewag - Peskeompskut on May 19, 1676, and tribal oral tradition indicates that following the battle, elements of the Pocumtuck fled to and were incorporated into the Abenaki people to the north and the Mahican people to the west.

The area was colonized as part of Deerfield by the English in 1686. In 1753, Greenfield, named for the Green River, was incorporated as a separate town from Deerfield.

In 1795 the South Hadley Canal opened, enabling boats to bypass the South Hadley falls and reach Greenfield via the Connecticut River. Located at the confluence of the Deerfield and Green rivers, and not far from where they merge into the Connecticut River, Greenfield developed into a trade center. Falls provided water power for industry, and Greenfield grew into a prosperous mill town. John Russell established the Green River Works in 1834, hiring skilled German workers at what was the country's first cutlery factory. The Connecticut River Railroad was the first of several railways to enter the town, replacing the former canal trade. During the 19th and 20th centuries, Greenfield was one of the most important American centers of the tap and die business and was the home of Greenfield Tap & Die Company (GTD).

It was designated the county seat when Franklin County was created from Hampshire County in 1811. 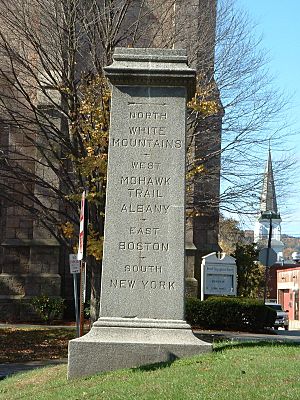 The road marker in Court Square

According to the United States Census Bureau, the town has a total area of 22 square miles (56.7 km2), of which 21 square miles (55.5 km2) is land and 0.5 square miles (1.2 km2), or 2.08%, is water. Greenfield is located at the center of the county and is bordered by Colrain, Leyden, and Bernardston to the north; Gill to the east; Montague to the southeast; Deerfield to the south; and Shelburne to the west. Greenfield is located 39 miles (63 km) north of Springfield and 90 miles (145 km) west-northwest of Boston.

Greenfield lies at the confluence of the Deerfield, Green, and Connecticut rivers. The Green River runs from the north, through town to the Deerfield, which lies along the city's southern border. From there, the Deerfield meets the Connecticut, which flows southward along the Montague border before bending eastward briefly before continuing southward. Several brooks flow into the three rivers, as well as a fourth river, the Fall River, which makes up the city's border with Gill. The city is located beside the Pocumtuck Range, the northernmost subridge of the Metacomet Ridge, and is surrounded by hills, with the town center lying on an elevated point above the rivers.

Greenfield lies at the junction of four highways. Interstate 91 travels north and south through the western stretch of the city and is duplexed for a 3-mile (5 km) stretch with Massachusetts Route 2. Route 2, which follows the rough path of (and is nicknamed after) the Mohawk Trail, enters over the Fall River as a surface road before becoming a limited-access highway until its concurrence with I-91. Once it leaves the interstate, Route 2 becomes a surface road again. Between the start of the limited access section of Route 2 and its split from I-91 at Exit 24, the Mohawk Trail follows Massachusetts Route 2A, which uses Route 2's former right of way through the center of Greenfield. At the town center, Route 2A meets the duplexed U.S. Route 5 and Massachusetts Route 10, which comes over the Deerfield River in the south before heading northward through town, with another interchange along the highway portion of Route 2.

Greenfield lies at the junction of two rail lines, an east–west line heading from the northern points of Worcester County towards the Hoosac Tunnel and Albany, New York, and the north–south line heading from Springfield in the south towards Vermont in the north. Both lines are owned and operated by Pan Am Railways.

Passenger rail service resumed in Greenfield on December 29, 2014, with the rerouting of Amtrak's Vermonter. The station platform in Greenfield is located behind the Olver Transit Center. The former Greenfield train station (torn down in 1966) was located across the tracks from the current train platform, in the present day Energy Park.

The town is served by the Peter Pan and Greyhound bus lines and is the hub of the Franklin Regional Transit Authority (FRTA), whose local service extends from Bernardston to Northampton and from Orange to Charlemont. The John W. Olver Transit Center is the hub for FRTA bus service, as well as the local depot for Peter Pan and Greyhound intercity service. MAX provides intercity bus service to Fitchburg, Worcester and Boston, with intermediate stops.

The nearest general aviation airport is located in the Turners Falls section of Montague, and the nearest national air service is at Bradley International Airport in Windsor Locks, Connecticut. 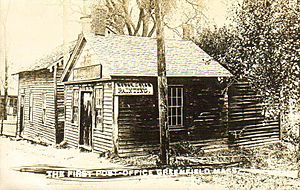 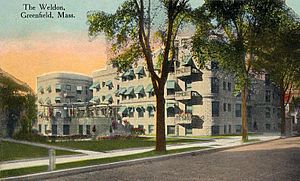 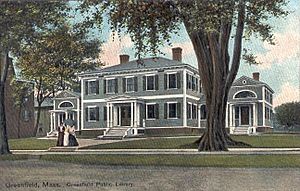 Greenfield operates its own public school system for the town's 1,700 students. Greenfield operates the Academy of Early Learning at North Parish for pre-kindergarten students, three elementary schools – the Four Corners School to the north, the Federal Street School centrally, and the Newton Elementary School to the west – for students from kindergarten through fourth grade, the Greenfield Middle School for students from fifth grade through seventh grades, and Greenfield High School for eighth through twelfth grades. 8th grade is separate and not part of the official high school. Greenfield's athletic teams are nicknamed the "Green Wave", and their school colors are green and white.

Greenfield operates the Poet Seat School, an alternative middle and high school for special needs students. On July 9, 2009, Greenfield's local school committee approved creation of the Virtual Academy or "MAVA @ Greenfield", the only kindergarten-through-twelfth grade distance learning school of its kind in the state. The MAVA program is also expected to provide expanded course offerings to students in the traditional public schools. Greenfield is also home to the Four Rivers Charter Public School, which serves students in grades 7-12.

Greenfield's oldest private school is the Stoneleigh-Burnham School, a private 7th-12th grade boarding school for girls. The Center School, established in 1981, serves students from preschool through eighth grade with a progressive approach to education.

As of 2014[update] there are no religious schools in Greenfield; the Cornerstone Christian School closed in 2013, and Holy Trinity School, a K-8 parochial school, closed in 2011.

The nearest state university is the University of Massachusetts Amherst. There are also several private colleges, including members of the Five Colleges and Seven Sisters, in the region, as well as Keene State College in Keene, New Hampshire. 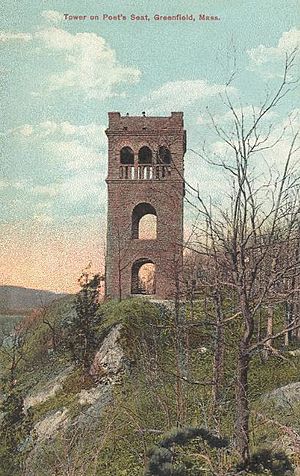 All content from Kiddle encyclopedia articles (including the article images and facts) can be freely used under Attribution-ShareAlike license, unless stated otherwise. Cite this article:
Greenfield, Massachusetts Facts for Kids. Kiddle Encyclopedia.