Turners Falls is an unincorporated village and census-designated place in the town of Montague in Franklin County, Massachusetts, United States. The population was 4,512 at the 2020 census. It is part of the Springfield, Massachusetts Metropolitan Statistical Area. Its name is generally used as a metonym for the entire town of Montague, for which it is the business district and comprises more than half the population. 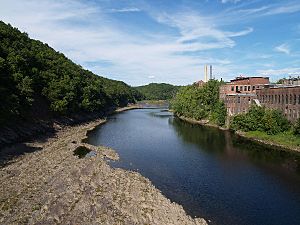 View of Connecticut River at Turners Falls (the right bank)

The village of Turners Falls was founded in 1868 as a planned industrial community according to the plan of Alvah Crocker, a prominent man from Fitchburg who envisioned in the immense power of the waterfalls the means of establishing a great city. Crocker was influenced by other, earlier and successful experiments in Lowell and elsewhere. Crocker’s vision was to attract industry to the town by offering cheap hydropower that was made by the harnessing of the Connecticut River, through the construction of a dam and canal. His development concept was to sell mill sites along the power canal to those companies and to sell individual building lots to mill workers who would come to work in the mills. The rest of the village was laid out in a horizontal grid pattern with cross streets numerically. Avenue A, the main commercial district was designed as a grand 100 foot tree lined avenue.

The largest of five villages, Turners Falls was named after Captain William Turner, who played a key role in the region’s Indian Wars. In 1676, during King Philip's War, Captain Turner led a group of about 160 mounted soldiers from Hadley and made a surprise attack on an Indian encampment located near the falls. The attack on a sleeping village of Native Americans on the Gill side of the Great Falls lasted several hours and resulted in the death of many people including many women and children. The area by the falls was traditionally shared by the Pocumtuk Confederacy, the Narragansetts, the Nipmucs, the Wampanoag, and the Wabanaki tribes because of the abundance of salmon and shad available there.

Of the 1620 participants, at least 40 were killed on the retreat. Some got separated from the main body and had to find their way alone; a few were successful while others never returned. Captain Turner's body was found about a month later and was buried on a bluff west of where he fell. A tablet marks the spot today.

The Turners Falls massacre is often viewed as a turning point in the King Philip's War. As the historian Russell Bourne points out, “After the Peskeompskut massacre, allied sachems openly discussed the strategy of King Phillip, the name given to the Native American leader Metacom, and sending his head to the English as a prelude to peace negotiations”. Within one month of the massacre, the English offensive in the Connecticut Valley ended suddenly. The end of King Philip's War came not long afterward.

In recognition of the tragic nature of the Turners Falls massacre, the Board of Selectmen and Town of Montague, as part of its 250th anniversary, joined with representatives of various Native American tribes on May 19, 2004 in a Reconciliation Day ceremony.

The central portion of the village is a historic district on the National Register of Historic Places. Known as the Turners Falls Historic District, it is roughly bounded by the Connecticut River, Power Canal, 9th Street and L Street. The Renaissance Community owned several properties and businesses in downtown Turners Falls from 1972 to 1980.

All content from Kiddle encyclopedia articles (including the article images and facts) can be freely used under Attribution-ShareAlike license, unless stated otherwise. Cite this article:
Turners Falls, Massachusetts Facts for Kids. Kiddle Encyclopedia.