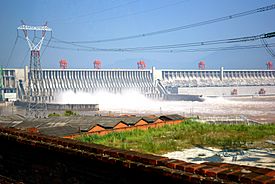 The Three Gorges Dam in China; the hydroelectric dam is the world's largest power station by installed capacity.

Hydropower is the capture of the energy of moving water for some useful purpose.

In the 1830s, at the peak of the canal-building era, hydropower was used to transport barge traffic up and down steep hills using inclined plane railroads. For direct mechanical power transmission industries that used hydropower had to be near the waterfall. For example, during the last half of the 19th century, many grist mills were built at Saint Anthony Falls, to use the 50 foot (15 metre) drop in the Mississippi River. The mills were important for the growth of Minneapolis. Today the largest use of hydropower is for electric power generation. That allows low cost energy to be used at long distances from the watercourse.

There are many forms of water power: 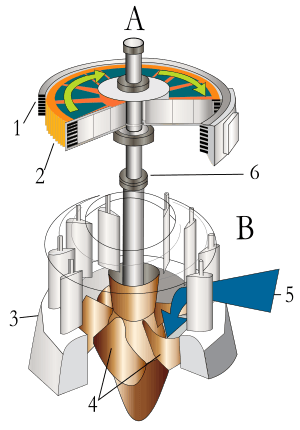 Hydroelectric power is a means of making electricity without burning fuel. Hydroelectric power supplies about 715,000 MWe or 19% of world electricity (16% in 2003). Large dams are still being designed. Apart from a few countries with plenty of it, hydro power is normally applied to peak load demand because it is readily stopped and started. Nevertheless, hydroelectric power is probably not a major option for future energy production in the developed nations, because most major sites within these nations are either already being exploited or are unavailable for other reasons, such as environmental considerations.

Hydropower produces essentially no carbon dioxide or other harmful emissions, in contrast to burning fossil fuels, and is not a significant contributor to global warming through CO2.

The chief advantage of hydroelectric dams is their ability to handle seasonal (as well as daily) high peak loads. When the electricity demands drop, the dam simply stores more water. Some electricity generators use water dams to store excess energy (often during the night), by using the electricity to pump water up into a basin. Electricity can be generated when demand increases. In practice the utilization of stored water in river dams is sometimes complicated by demands for irrigation which may occur out of phase with peak electrical demands.

Harnessing the tides in a bay or estuary has been achieved in France (since 1966), Canada and Russia, and could be achieved in other areas with a large tidal range. The trapped water turns turbines as it is released through the tidal barrage in either direction. Another possible fault is that the system would generate electricity most efficiently in bursts every six hours (once every tide). This limits how tidal energy can be used.

A relatively new technology, tidal stream generators draw energy from currents in much the same way that wind generators do. The higher density of water means that a single generator can provide significant power. This technology is at the early stages of development and will need more research before it can produce any higher amount of energy.

The Canadian company Blue Energy has plans for installing very large arrays tidal current devices mounted in what they call a 'tidal fence' in various locations around the world, based on a vertical axis turbine design.

Power from ocean surface wave motion might produce much more energy than tides. It has been tested that it is possible to produce energy from waves, particularly in Scotland in the UK. But there are still a lot of technical problems.

A prototype shore based wave power generator is being constructed at Port Kembla in Australia and is expected to generate up to 500 MWh annually. Wave energy is captured by an air driven generator and converted to electricity. For countries with large coastlines and rough sea conditions, the energy of waves offers the possibility of generating electricity in utility volumes. Excess power during rough seas could be used to produce hydrogen.

All content from Kiddle encyclopedia articles (including the article images and facts) can be freely used under Attribution-ShareAlike license, unless stated otherwise. Cite this article:
Hydropower Facts for Kids. Kiddle Encyclopedia.