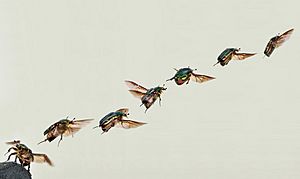 A beetle moving through the air

Movement, or motion, is the state of changing something's position—that is, changing where something is. A flying bird or a walking person are moving, because they change where they are from one place to another. There are many kinds of science and math related to movement.

There are many things involved in movement, such as speed, velocity, acceleration, gravity, magnetic attraction and repulsion, friction, and inertia. Also, work is needed to produce movement. Light moves at about 300,000 kilometres per second or 186,000 miles per second.

In animals, movement is controlled by the nervous system, especially the brain and spinal cord.

The muscles that control the eye are driven by the optic tectum in the midbrain. All the voluntary muscles in the body are driven by motor neurons in the spinal cord and hindbrain.

The brain has several motor areas that project directly to the spinal cord. At the highest level is the primary motor cortex, a strip of tissue at the back edge of the frontal lobe. This tissue sends a massive projection directly to the spinal cord, through the pyramidal tract. This allows for precise voluntary control of the fine details of movements. There are other brain areas which affect movement. Among the most important secondary areas are the premotor cortex, basal ganglia, and cerebellum.

In addition to all of the above, the brain and spinal cord contain extensive circuitry to control the autonomic nervous system, which works by secreting hormones and by modulating the "smooth" muscles of the gut. The autonomic nervous system affects heart rate, digestion, respiration rate, salivation, perspiration, urination and several other processes. Most of its functions are not under direct voluntary control.

All content from Kiddle encyclopedia articles (including the article images and facts) can be freely used under Attribution-ShareAlike license, unless stated otherwise. Cite this article:
Movement Facts for Kids. Kiddle Encyclopedia.