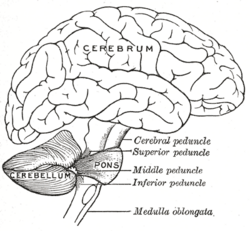 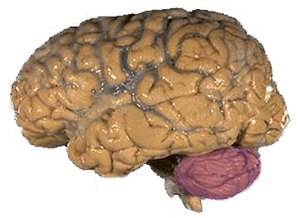 A human brain, the cerebrellum is shown in purple (brain facing left)

In all vertebrates, including human beings, the cerebellum is one of the main divisions of the brain.

The cerebellum works mainly to control balance and coordinate movement. It combines signals from eyes, muscle spindles, and ears with motor commands from the forebrain and helps to coordinate control of the body. More advanced regions of the human cerebellum may be crucial to language and mental dexterity. Bands of axons extend from the cerebellum into the pons.

All content from Kiddle encyclopedia articles (including the article images and facts) can be freely used under Attribution-ShareAlike license, unless stated otherwise. Cite this article:
Cerebellum Facts for Kids. Kiddle Encyclopedia.