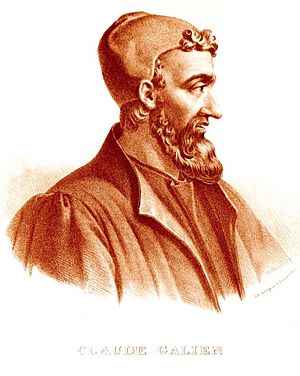 Galen of Pergamum (AD 129 – 199/217) was a prominent Roman physician and philosopher from Pergamon, a Greek city in western Asia Minor. He was an important medical researcher during the time of the Roman Empire. His theories influenced Western medical science for over a thousand years.

He came up with the 'Theory of Opposites' based upon Hippocrates' Four Humours' theory, which helped develop medicine in the Roman and again in the Middle Ages to include more natural based medicine (rather that just religious medicine).

Some of his observations in his books were wrong, as he could only dissect animals (mostly pigs and apes) and compare them to humans, because he was not allowed to dissect human corpses. Later on in the Renaissance period people, such as Andreas Vesalius wrote books showing that some of what Galen said was wrong.

Galen was vital in the beginnings of natural medicine, and is often known as the 'Father of Anatomy'.

All content from Kiddle encyclopedia articles (including the article images and facts) can be freely used under Attribution-ShareAlike license, unless stated otherwise. Cite this article:
Galen Facts for Kids. Kiddle Encyclopedia.