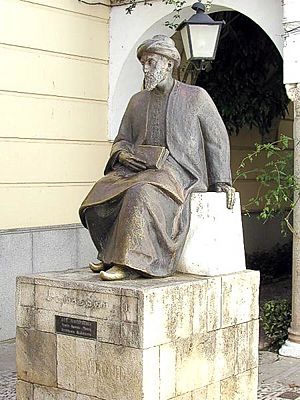 Maimonides was born in Cordoba in Spain, in 1135. His Hebrew name was Moses ben Maimon. He is also known as the Rambam, from the initial letters of his title and name, Rabbi Moshe ben Maimon.

Maimonides was a doctor by profession. Maimonides was one of the most important Jewish philosophers of the Middle Ages. He tried to show that the philosophy of the ancient Greek thinker, Aristotle, and Judaism supported each other.

Maimonides' main philosophical work was called The Guide for the Perplexed. He wrote it in Arabic by 1190. It has ideas from Aristotle's writings. The Guide influenced Christian Aristotelian theologians, for example, Thomas Aquinas. In 1168, Maimonides finished a commentary to the Mishnah, the written version of traditional Jewish oral law. Maimonides completed these books, called Mishneh Torah, in about 1178. They one of the most important collections of Jewish laws.

When Maimonides was thirteen years old, the Almohads took Cordoba away from the Almoravid dynasty. The Almohads were Muslims who were conquering Al-Andalus (Muslim Spain). They forced all non-Muslims to leave, change their religion to Islam, or be killed. This forced Maimonides' family to leave Cordoba. They spent twelve years traveling and looking for a home. During these years, he wrote the commentary on the Mishnah. Finally, his family settled in Cairo, Egypt. In 1166, Maimonides' father died and his brother drowned on a shipwreck in the Indian Ocean.

By this time, Maimonides was a very popular Jewish leader. He helped the Jewish community in Cairo, Egypt. He lived there for the last part of his life, and taught and wrote about Judaism. He died in Cairo on December 13, 1204.

All content from Kiddle encyclopedia articles (including the article images and facts) can be freely used under Attribution-ShareAlike license, unless stated otherwise. Cite this article:
Maimonides Facts for Kids. Kiddle Encyclopedia.