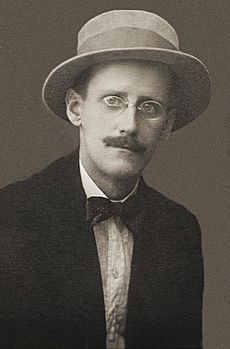 James Augustine Aloysius Joyce (Irish: Séamus Seoighe) (2 February 1882 - 13 January 1941) was an Irish writer and poet of the modernist movement. He was from Dublin, Ireland. He is widely considered one of the most significant writers of the 20th century.

His Irish experiences are essential to his writings, and provide all of the settings for his fiction and much of their subject matter. He began a new style of writing which is called stream of consciousness, which is writing all the thoughts that a character has. His work has influenced many other writers.

Some books that Joyce wrote are:

His books have been named as part of the 100 best English-language novels of the 20th century by the editorial board of the American Modern Library. In their selection, the board chose Ulysses as #1 book of the century.

James Joyce died on January 13, 1941 at Zürich, Switzerland and is buried in the Fluntern Cemetery, in Zürich with his wife. The life of Joyce is celebrated annually on June 16, Bloomsday, in Dublin and in an increasing number of cities worldwide.

All content from Kiddle encyclopedia articles (including the article images and facts) can be freely used under Attribution-ShareAlike license, unless stated otherwise. Cite this article:
James Joyce Facts for Kids. Kiddle Encyclopedia.