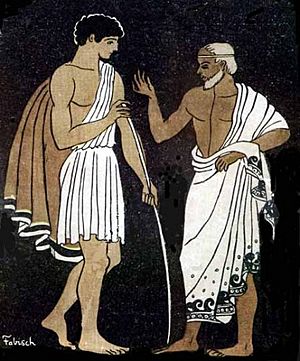 Telemachos (or Latin Telemachus) is a person in Greek mythology. He is the son of Odysseus of Ithaca and Penelope. While Odysseus was trying return home, many believed him to be dead. Suitors surrounded his home, trying to claim Penelope as their wife. Athena came to Telemachus in disguise and gave him advice. She told him to search for evidence that his father was still alive. If he was alive he could force the suitors away. However, if he believed his father to be dead, he would let one of the suitors claim her. He gathered a search party and set out to question many of the people Odysseus served with in the war. He decided that his father was dead. Telemachos held a competition for the suitors to claim Penelope. Odysseus showed up in secret, won the competition and rejoined his family.

All content from Kiddle encyclopedia articles (including the article images and facts) can be freely used under Attribution-ShareAlike license, unless stated otherwise. Cite this article:
Telemachus Facts for Kids. Kiddle Encyclopedia.