Ithaca is one of the Ionian Islands on the west coast of Greece. Ithaca's main island has an area of 96 square kilometres (37 sq mi) and had a population in 2011 of 3,231.

The capital, Vathy, has one of the world's largest natural harbours.

As of 2002, Ithaca became a popular destination for holiday tourists on day visits from the other Ionian Islands, especially after Charles, Prince of Wales and the late Diana, Princess of Wales spent part of their honeymoon there.

Odysseus was said to be the king of Ithaca in the epic poem the Odyssey, which was written in the Ancient Greek language. It is possible that this ancient island is in a place different from the modern island.

The island has been known as Ithaca from an early date, as coins and inscriptions show. Coins from Ithaca frequently portray Odysseus, and an inscription from the 3rd century BC refers to a local hero-shrine of Odysseus and games called the Odysseia.

The Archaeological site of "School of Homer" on modern Ithaca is the only place between Lefkas–Kefalonia–Ithaca Triangle where Linear B inscriptions have been found, near royal remains. In 2010, Greek archaeologists discovered the remains of an 8th-century BC palace in the area of Agios Athanasios, leading to reports that this might have been the site of Odysseus's palace.

The origins of the first people to inhabit the island, which occurred during the last years of the Neolithic period (4000–3000 BC), are not clear. The traces of buildings, walls and a road from this time period prove that life existed and continued to do so during the Early Hellenic era (3000–2000 BC). In the years (2000–1500 BC) some of the population migrated to part of the island. The buildings and walls that were excavated showed the lifestyle of this period had remained primitive. Much of the island's architecture was destroyed in an earthquake in 1953. 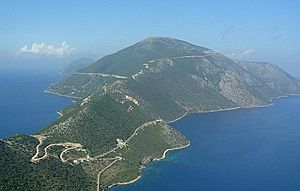 View of northern Ithaca across the isthmus of Aethos 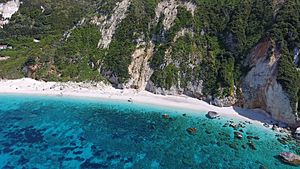 Ithaca lies east of the northwest coast of Cephalonia, from which it is separated by the Strait of Ithaca. The regional unit covers an area of 117.812 square kilometres (45.5 sq mi) and has approximately 100 kilometres (62 miles) of coastline. The main island stretches in the north-south direction, in length of 23 km (14 miles) and maximum width of 6 km (4 miles). It consists of two parts, of about equal size, connected by the narrow isthmus of Aetos (Eagle), just 600 metres (1,969 feet) wide. The two parts enclose the bay of Molos, whose southern branch is the harbor of Vathy, the capital and largest settlement of the island. The second largest village is Stavros in the northern part.

Lazaretto Islet (or Island of The Saviour) guards the harbor. The church of The Saviour and the remains of an old gaol are located on the islet.

All content from Kiddle encyclopedia articles (including the article images and facts) can be freely used under Attribution-ShareAlike license, unless stated otherwise. Cite this article:
Ithaca Facts for Kids. Kiddle Encyclopedia.