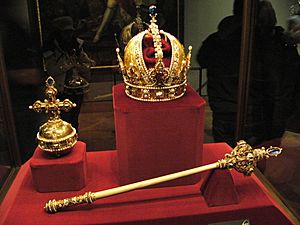 A king is a man who rules a country, because of inheritance. A king usually comes to power when the previous monarch dies, who is usually a family member of his. Sometimes a person may become king due to the previous monarch's abdication, for example George VI.

For most of history, most countries were ruled in this way, especially in Europe. Some countries, such as France, are no longer monarchies. Some, such as the United Kingdom, still have a royal family.

If a country has a king or a queen, that means it is a monarchy. A country which a king or queen rules is called a kingdom.

All content from Kiddle encyclopedia articles (including the article images and facts) can be freely used under Attribution-ShareAlike license, unless stated otherwise. Cite this article:
King Facts for Kids. Kiddle Encyclopedia.