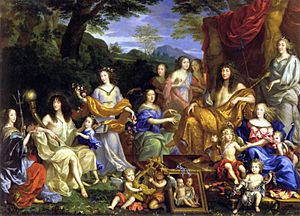 The Royal Family of France in classical costume during the reign of Louis XIV.

A royal family is the immediate family of a king or queen regnant, and sometimes his or her extended family. The term imperial family appropriately describes the family of an emperor or empress, and the term papal family describes the family of a pope, while the terms baronial family, comital family, ducal family, archducal family, grand ducal family, or princely family are more appropriate to describe, respectively, the relatives of a reigning baron, count, duke, archduke, grand duke, or prince. However, in common parlance members of any family which reigns by hereditary right are often referred to as royalty or "royals." It is also customary in some circles to refer to the extended relations of a deposed monarch and his or her descendants as a royal family. A dynasty is sometimes referred to as "the House of ...". As of July 2013, there are 26 active sovereign monarchies in the world who rule or reign over 43 countries in all.

Members of a royal family

A royal family typically includes the spouse of the reigning monarch, surviving spouses of a deceased monarch, the children, grandchildren, brothers, sisters, and paternal cousins of the reigning monarch, as well as their spouses. In some cases, royal family membership may extend to great grandchildren and more distant descendants of a monarch. In certain monarchies where voluntary abdication is the norm, such as the Netherlands, a royal family may also include one or more former monarchs. In certain instances, such as in Canada, the royal family is defined by who holds the styles Majesty and Royal Highness. There is often a distinction between persons of the blood royal and those that marry into the royal family. Under most systems, only persons in the first category are dynasts, that is, potential successors to the throne (unless the member of the latter category is also in line to the throne in their own right, a frequent occurrence in royal families which frequently intermarry). This is not always observed; some monarchies have operated by the principle of jure uxoris.

In addition, certain relatives of the monarch (by blood or marriage) possess special privileges and are subject to certain statutes, conventions, or special common law. The precise functions of a royal family vary depending on whether the polity in question is an absolute monarchy, a constitutional monarchy, or somewhere in between. In certain monarchies, such as that found in Saudi Arabia or Kuwait, or in political systems where the monarch actually exercises executive power, such as in Jordan, it is not uncommon for the members of a royal family to hold important government posts or military commands. In most constitutional monarchies, however, members of a royal family perform certain public, social, or ceremonial functions, but refrain from any involvement in electoral politics or the actual governance of the country.

The specific composition of royal families varies from country to country, as do the titles and royal and noble styles held by members of the family. The composition of the royal family may be regulated by statute enacted by the legislature (e.g., Spain, the Netherlands, and Japan since 1947), the sovereign's prerogative and common law tradition (e.g., the United Kingdom), or a private house law (e.g., Liechtenstein, the former ruling houses of Bavaria, Prussia, Hanover, etc.). Public statutes, constitutional provisions, or conventions may also regulate the marriages, names, and personal titles of royal family members. The members of a royal family may or may not have a surname or dynastic name (see Royal House).

In a constitutional monarchy, when the monarch dies, there is always a law or tradition of succession to the throne that either specifies a formula for identifying the precise order of succession among family members in line to the throne or specifies a process by which a family member is chosen to inherit the crown. Usually in the former case the exact line of hereditary succession among royal individuals may be identified at any given moment during prior reigns (e.g. United Kingdom, Sark, Nizari Ismailis, Japan, Balobedus, Sweden, Kingdom of Benin) whereas in the latter case the next sovereign may be selected (or changed) only during the reign or shortly after the demise of the immediately preceding monarch (e.g. Cambodia, KwaZulu Natal, Buganda, Saudi Arabia, Swaziland, Yorubaland, The Kingitanga). Some monarchies employ a mix of these selection processes (Malaysia, Monaco, Tonga, Jordan, Morocco), providing for both an identifiable line of succession as well as authority for the monarch, dynasty or other institution to alter the line in specific instances without changing the general law of succession. Some countries have abolished royalty altogether, as in post-revolutionary France (finally in 1870) and Russia (1917).

Whilst mediatization occurred in other countries such as France, Italy and Russia, only the certain houses within the former Holy Roman Empire are collectively called the Mediatized Houses.

All content from Kiddle encyclopedia articles (including the article images and facts) can be freely used under Attribution-ShareAlike license, unless stated otherwise. Cite this article:
Royal family Facts for Kids. Kiddle Encyclopedia.