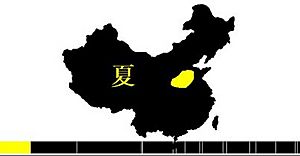 Xia dynasty (Chinese: 夏朝; Pinyin: xià cháo; Wade–Giles: Hsia-ch'ao) was the first dynasty of China. It was founded in 2100 BC and ended in 1600 BC. Until archaeologists dug at Erlitou in Henan Province, many scientists were not sure if the Xia Dynasty was real or a myth. The last king was Jie who was said to be cruel and greedy. He was defeated by T'ang, the king of the Shang people from the east.

Kings of the Xia dynasty

All content from Kiddle encyclopedia articles (including the article images and facts) can be freely used under Attribution-ShareAlike license, unless stated otherwise. Cite this article:
Xia dynasty Facts for Kids. Kiddle Encyclopedia.