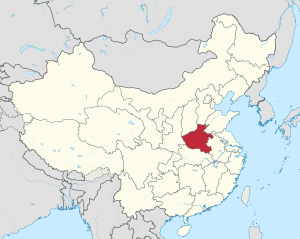 Henan is a province of the People's Republic of China. It is in the central eastern part of China. The name Henan means "south of the Yellow River." The capital of Henan is Zhengzhou.

The abbreviation of Henan is Yu (豫) to remember a kingdom from history yhat was in the area, and also because another province also has "He" (河) in its name, Hebei (河北).

All content from Kiddle encyclopedia articles (including the article images and facts) can be freely used under Attribution-ShareAlike license, unless stated otherwise. Cite this article:
Henan Facts for Kids. Kiddle Encyclopedia.