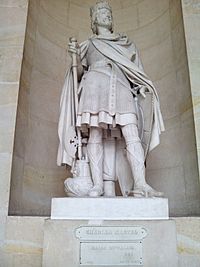 Charles Martel for whom the dynasty is named

The Carolingian dynasty was a Frankish noble family who ruled over a large part of western Europe from 751 to 987. They were a line of mayors, kings, and princes who succeeded the Merovingian dynasty. The most famous member of the family was Charlemagne. The dynasty was named after Charlemagne's grandfather, Charles Martel. He was a Mayor of the Palace of Austrasia and Neustria. The mayors of the palace were the real power behind the throne.

Charles Martel (meaning "the hammer") left his wealth and power to his two sons, Pepin III and Carloman. In 771 Carloman died leaving his half to Pepin who became Mayor of the Palace. When the last of the Merovingian kings, Childeric III, was deposed by the Pope in Rome, Pepin was made king of the Franks. Pope Stephen III traveled to France and placed the crown on his head. Pepin left the kingdom to his two sons, Charles and Carloman.

Charles and his brother shared the kingdom for some time. Carloman then traveled to Rome and became a monk. Charles became the sole king. He then earned his name "Charles the Great" (Charlemagne) by defeating the Lombards, the Saxons, and the Avars. In 800 Charlemagne was crowned Holy Roman Emperor by Pope Leo III. The dynasty was passed down to his son, Louis the Pious and to his grandsons. By the time Louis inherited the kingdom the Carolingian Empire had already started to decline. By the end of the 9th century it came to an end. With the collapse of the empire the dynasty came to an end.

All content from Kiddle encyclopedia articles (including the article images and facts) can be freely used under Attribution-ShareAlike license, unless stated otherwise. Cite this article:
Carolingian dynasty Facts for Kids. Kiddle Encyclopedia.