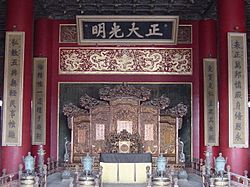 The throne of the Emperor of China at the Forbidden City

A throne is the official chair or seat upon which a monarch (royal ruler) is seated on state or ceremonial occasions. The word "throne" can also refer to the monarchy itself.

All content from Kiddle encyclopedia articles (including the article images and facts) can be freely used under Attribution-ShareAlike license, unless stated otherwise. Cite this article:
Throne Facts for Kids. Kiddle Encyclopedia.