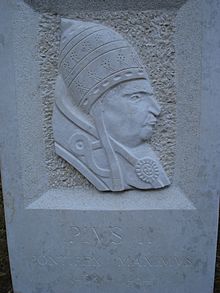 Pius II was born at Corsignano, which is near Siena. He was the oldest of 18 children.

He studied at the University of Siena.

In 1447, Pope Nicholas V made Piccolomini Bishop of Trieste. In 1450, he was made Bishop of Siena.

In 1456, Pope Calixtus III raised Bishop Piccolomini to the rank of cardinal.

Cardinal Piccolomini was elected pope in 1458. The pope chose to be called "Pius" because of the adjective pious which recurs in the phrase "pius Aeneas" in Virgil's Aeneid.

Pope Pius was involved in Italian and European political disputes.

According to Niccolò Machiavelli, "Pius showed himself mindful above all of the welfare of Christendom and of the honour of the Church, independent of any private passion or interest of his own."

St. Catherine of Siena was canonized during his reign.

In a statistical overview derived from writings by and about Pope Pius II, OCLC/WorldCat includes roughly 20+ works in 30+ publications in 5 languages and 120+ library holdings.

All content from Kiddle encyclopedia articles (including the article images and facts) can be freely used under Attribution-ShareAlike license, unless stated otherwise. Cite this article:
Pope Pius II Facts for Kids. Kiddle Encyclopedia.