Catherine of Siena facts for kids

Saint Catherine of Siena TOSD (March 25, 1347 – April 29, 1380) was a saint. She was born in Sienna and died in Rome. She promoted peace in Italy and is one of the two patron saints of Italy; the other being Saint Francis of Assisi

She was born Katerina de Benincasa in western Italy, the 25th of 25 children. She was born at the time of the Black Death, or Bubonic Plague. Although it probably killed many she knew, she herself did not contract the disease and survived the epidemic. She had a twin sister, who died several months later. Her family was part of the lower classes and she did not become literate until 1378.

At the age of six, Catherine had a vision of Jesus Christ. She continued to receive many visions throughout her life. At age 12, Catherine cut off her hair and was obligated to serve her family, living in small quarters in the basement. At the age of 16, she entered the Third Order of Saint Dominic and later became a Dominican nun.

She wrote a book called Dialogue, which taught that if you love your neighbors it is loving God. She also devoted her life to improving the Catholic church, helping the ill, poor, and spiritually underprivileged. Catherine persuaded the pope to return from Avignon, France and back into Rome. She also tried to start a new Crusade to the holy land, Jerusalem. She died of “holy anorexia”, as she ate very little in the name of God. She became a saint in 1461, and was later made a Doctor of the Church in 1970 by Pope Paul VI and a patron of Europe in 1999. 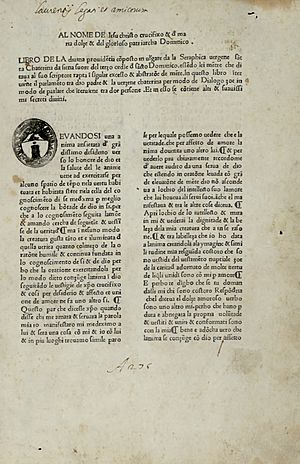 All content from Kiddle encyclopedia articles (including the article images and facts) can be freely used under Attribution-ShareAlike license, unless stated otherwise. Cite this article:
Catherine of Siena Facts for Kids. Kiddle Encyclopedia.