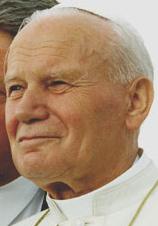 Pope John Paul II beatified more people than many of the popes before him put together.

Beatification (from Latin beatus, blessed, Greek μακάριος, makarios and Latin facere, make) is a recognition given by the Catholic Church of a dead person's entrance into Heaven and power to help people who pray in his or her name. Beatification is the third of the four steps in the canonization process. A person who is beatified is given the title "Blessed".

All content from Kiddle encyclopedia articles (including the article images and facts) can be freely used under Attribution-ShareAlike license, unless stated otherwise. Cite this article:
Beatification Facts for Kids. Kiddle Encyclopedia.