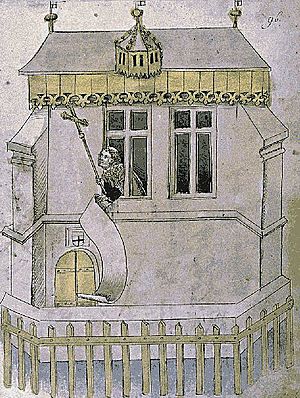 Habemus Papam at the Council of Constance

The Western Schism was a split between factions of the Roman Catholic Church between 1378 and 1417.

During this period, more than one claimed to be the true pope.

The reasons for the split were mostly political, rather than theological. The Council of Constance (1414–1418) ended the schism when they elected Martin V as the new pope.

All content from Kiddle encyclopedia articles (including the article images and facts) can be freely used under Attribution-ShareAlike license, unless stated otherwise. Cite this article:
Western Schism Facts for Kids. Kiddle Encyclopedia.