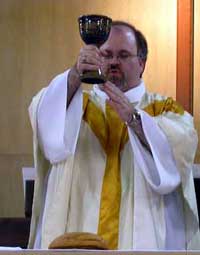 The Eucharist, also called holy communion, the sacrament, or the Lord's supper, is a kind of religious ritual in many Christian churches. It started when Jesus Christ told his followers to eat bread (His body) and drink wine (His blood) in memory of him, at the Last Supper.

In the Roman Catholic Church

According to the Roman Catholic Church, the Eucharist is the true presence of Jesus Christ, the Son of God. During a Mass, through the act of transubstantiation, the bread and wine offered change, and are no longer bread and wine. They become the Body and Blood of Jesus Christ. The bread and wine do not change appearance, but they are the Body and Blood of Jesus Christ, which Catholics in good standing (not in the state of mortal sin) come and receive Christ—they consume Him. This follows what was said by Christ "Eat my Body and Drink my Blood" (John ch.6). Most Protestant denominations believe that this was meant as a symbol, while the Catholic Church bases its beliefs on the tradition handed down through the church.

First century St. Ignatius of Antioch, disciple of the beloved disciple John, in speaking of "the heretics plaguing the church" in their day, wrote: "They abstain from the Eucharist because they do not confess that the Eucharist is the flesh of our Savior Jesus Christ" (Smyrnaeans, 7).

From the second century, St. Justin Martyr wrote: "This food we call Eucharist, which no one is allowed to share except the one who believes that our teaching is true, and who has been washed with the washing that is for the remission of sins, and unto regeneration, and so lives as Christ has handed down. For we do not receive these as common bread and common drink; but just as Jesus Christ our Savior, having been made flesh by the word of God, had both flesh and blood for our salvation, so likewise we have learned that the food over which thanks has been given by the prayer of the word which comes from him, and by which our blood and flesh are nourished through a change, is the Flesh and Blood of the same incarnate Jesus" (The First Apology).

In most Protestant churches, not including Lutheranism, the sacrament of communion involves eating small wafers or Matzos and drinking wine or grape juice, and not believing that it is the actual body and blood of Jesus, but as a very important symbolic observance, and fulfillment of what Christ commanded. Some churches offer it daily, some weekly, some monthly, and some a few times a year.

In the Latter Day Saints or "Mormon" Church, followers eat small pieces of bread and drink water. They believe that this is a symbol of the body and blood of Jesus, and they call it the Sacrament. They also believe that it helps them to make the promises of baptism all over again.

All content from Kiddle encyclopedia articles (including the article images and facts) can be freely used under Attribution-ShareAlike license, unless stated otherwise. Cite this article:
Eucharist Facts for Kids. Kiddle Encyclopedia.