The Last Supper facts for kids 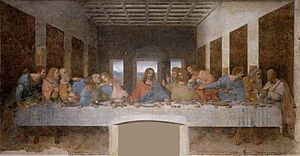 The Last Supper is a painting by Leonardo da Vinci. It is a picture of the last supper of Jesus and his disciples. It shows how they reacted when Jesus said that one of them would betray him. Each disciple has their own expression showing their own reaction to what Jesus has just told them.

The painting is a mural on the wall of the Santa Maria delle Grazie rectory in the dining room in Milan, Italy. It measures 460 X 880 cm. Da Vinci began painting it in 1495 and finished it in 1498, but did not work on it all the time between these years.

All content from Kiddle encyclopedia articles (including the article images and facts) can be freely used under Attribution-ShareAlike license, unless stated otherwise. Cite this article:
The Last Supper Facts for Kids. Kiddle Encyclopedia.