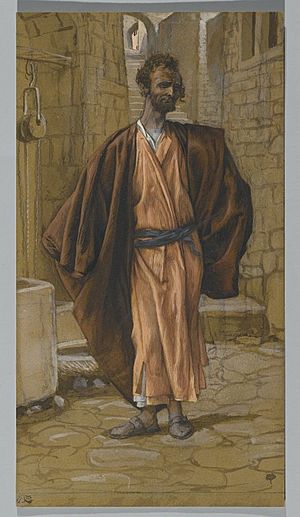 Judas Iscariot was, according to the New Testament, one of the twelve original Apostles of Jesus. Among the twelve, he was apparently designated to keep account of the "money bag", but he is most traditionally known for his role in Jesus' betrayal into the hands of Roman authorities.

His name is also associated with a Gnostic gospel, the Gospel of Judas, that exists in an early fourth century Coptic text. Judas has been a figure of great interest to esoteric groups, such as many Gnostic sects, and has also been the subject of many philosophical writings.

The term Judas has entered many languages as an expression for betrayer, and Judas has become known as the original betrayer in Western art and literature. Judas is given some role in virtually all literature telling the Passion story, and appears in a number of modern novels and movies. 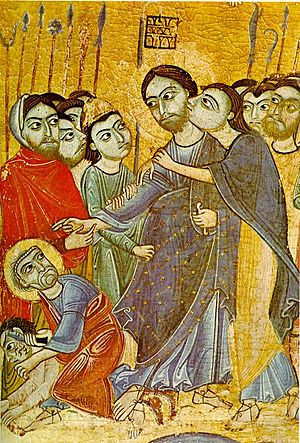 Judas is mentioned in the synoptic gospels, the Gospel of John and at the beginning of Acts of the Apostles. Mark states that the chief priests were looking for a "sly" way to arrest Jesus. They did not wish not to do so during the feast because they were afraid that the people would riot; instead, they choose the night before the feast to arrest him. In the Gospel of Luke, Satan enters Judas at this time.

According to the account given in the Gospel of John, Judas carried the disciples' money bag and betrayed Jesus for a bribe of "thirty pieces of silver" by identifying him with a kiss—"the kiss of Judas"—to arresting soldiers of the High Priest Caiaphas, who then turned Jesus over to Pontius Pilate's soldiers.

The text of the Gospels suggests that Jesus both foresaw and allowed Judas' betrayal. In April 2006, a Coptic papyrus manuscript titled the Gospel of Judas dating back to 200 AD, was translated into modern language, it added to the possibility that according to early Christian writings, Jesus may have asked Judas to betray him to fulfill the prophecies. 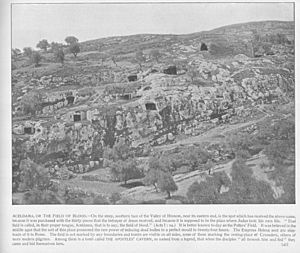 Aceldama, or Field of Blood, photographed 1894

There are two different canonical references to the remainder of Judas' life:

The following people were the other apostles of Jesus: 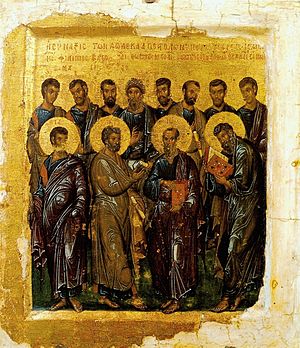 All content from Kiddle encyclopedia articles (including the article images and facts) can be freely used under Attribution-ShareAlike license, unless stated otherwise. Cite this article:
Judas Iscariot Facts for Kids. Kiddle Encyclopedia.