Jude the Apostle facts for kids

Saint Jude's attribute is a club. He is also often shown in icons with a flame around his head. This represents his presence at Pentecost, when he received the Holy Spirit with the other apostles. Another common attribute is Jude holding an image of Jesus Christ, known as the Image of Edessa. In some instances, he may be shown with a scroll or a book (the Epistle of Jude) or holding a carpenter's rule. Tradition says that Jude the Apostle was vegetarian. 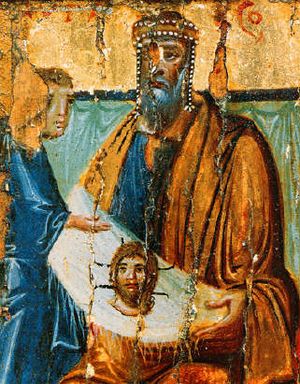 Jude holding The Image of Edessa

Among some Roman Catholics, Saint Jude is venerated as the "patron saint of lost causes". The Church wanted to encourage worship of this "forgotten" apostle, and maintained that Saint Jude would help in any lost cause to prove his sanctity and devotion for Christ.

Saint Jude is the patron saint of the Chicago Police Department and of Clube de Regatas do Flamengo (a soccer team in Rio de Janeiro, Brazil). His other patronages include desperate situations and hospitals. One of his namesakes is St. Jude Children's Research Hospital in Memphis, Tennessee, which has helped many children with terminal illnesses and their families since its founding in 1962.

Jude is clearly different from Judas Iscariot, another apostle and later the betrayer of Jesus. In most Bibles in languages other than English and French, Jude and Judas are referred to by the same name. 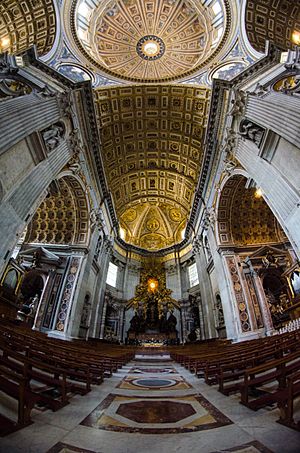 St. Jude was martyred (killed for his beliefs) with another apostle, Simon the Zealot in Beirut, Lebanon, around AD 65. In the Roman Catholic church, Jude and Simon's feast day is celebrated on 28 October. The axe that he is often shown holding in pictures symbolizes the way in which he was killed. Sometime after his death, Saint Jude's body was brought from Beirut to Rome and placed in a crypt in St. Peter's Basilica which was visited by many devotees. Now his bones are in the left transept of St. Peter's Basilica under the main altar of St. Joseph in one tomb with the remains of the apostle Simon the Zealot.

Many countries worship the Apostle Jude and have constructed shrines or churches dedicated to his memory. His feast day is October 28 (Roman Catholic Church, the Anglican Communion and Lutheran Church) and June 19 (Eastern Orthodox Church).

All content from Kiddle encyclopedia articles (including the article images and facts) can be freely used under Attribution-ShareAlike license, unless stated otherwise. Cite this article:
Jude the Apostle Facts for Kids. Kiddle Encyclopedia.