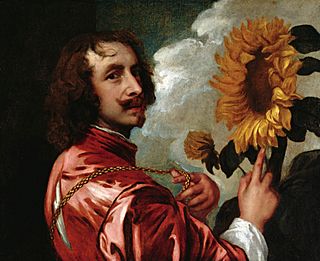 Self Portrait With a Sunflower showing the gold collar and medal King Charles I gave him in 1633. The sunflower may represent the king, or royal patronage.

Sir Anthony van Dyck (22 March 1599 – 9 December 1641) was a Flemish Baroque artist. He was the leading court painter in England. He is most famous for his portraits of Charles I of England and his family and court. His style of painting was used for the next 150 years. He also painted biblical and mythological subjects.

All content from Kiddle encyclopedia articles (including the article images and facts) can be freely used under Attribution-ShareAlike license, unless stated otherwise. Cite this article:
Anthony van Dyck Facts for Kids. Kiddle Encyclopedia.