Giovanni Lorenzo Bernini (1598-1655) (known as Gianlorenzo Bernini) was one of the greatest artists of the Italian Baroque period. He was famous both for his sculpture and his architecture. From 1627, he worked for Pope Urban XIII and then for Pope Alexander VII at St. Peter's Basilica where he designed the famous piazza (place) in front of the basilica and many of the most splendid things that are inside.

Bernini was born in Naples, Italy. He was the son of Pietro Bernini (1562-1629) who was a well known sculptor. When he was about 7 years old, his father took him to Rome.

As a boy and as a young man living in Rome, he saw the works of many famous artists. He saw the famous fresco paintings on the ceiling of the Sistine Chapel by Michelangelo, one of the most famous artists of the 1500s. The paintings told the Bible story of Creation. He saw the huge dome of St. Peter's Basilica which Michelangelo designed and the new extension to the building that was being built by Carlo Maderna.

One artist who Bernini knew well was Annibale Carracci who painted scenes on the ceilings of rooms for the pope. The scenes told stories, often Ancient Roman legends. Carracci took Bernini into St. Peter's Basilica. Bernini fell on his knees and decided at that moment that he wanted to make something beautiful and splendid to honour Saint Peter.

By the time he was 20, Bernini was a sculptor, carving statues out of marble. He had learnt a lot, not just how to carve marble, which he learnt from his father, but how to make figures that told stories like Carracci's and Michelangelo's and seemed to be alive, like Caravaggio's. An important man in the Roman Catholic Church, Cardinal Scipione Borghese, saw his work and became his patron, paying Bernini to make many beautiful sculptures for him and his family. Soon the cardinal's uncle got to hear about Bernini. He was Pope Urban VIII, the most powerful man in Italy. He asked Bernini to work for him at St. Peter's Basilica. Bernini spent 40 years of his life there, all the time except for a trip to France and shorter visits to other cities. 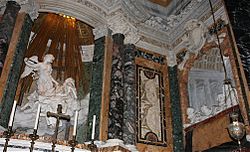 The sculptured Conaro family watch the vision of St. Theresa.

Most sculptures of that time were just of one figure. But Bernini had seen Michelangelo's famous sculpture of the "Pieta" which showed the Virgin Mary grieving over the body of her dead son, Jesus. Bernini made figures that were in groups and told stories. One of his famous groups comes from Roman Mythology. It shows the god, Apollo chasing a beautiful wood nymph (a sort of fairy) that he had fallen in love with. But her father had magic powers and suddenly turned his daughter into a tree. Bernini sculptured the very moment when her toes are turning into roots, her legs are becoming the trunk, and leaves are sprouting out of her hands and long hair. She has her mouth open and a look of horror on her face. No-one had ever tried to carve anything like that in marble before. The thing that is so amazing about Bernini's sculpture is that he has made the flesh, the wood, the leaves and the hair all look so real, even though they are all carved in white stone.

Bernini's most famous sculpture is St. Theresa in Ecstasy. It tells the story of a saint who had a vision of an angel. Her vision was so beautiful that she fainted. Bernini has sculptured the vision, with St. Theresa lying on a cloud with the laughing angel in front of her. Their robes are blowing around, and it is hard to believe that the whole scene, which is set against a wall, is not really floating. Bernini did not just design the statues. He also designed the walls of the chapel around it, which is like a stage-set, made of beautifully patterned marble. Against another wall, he carved a balcony and several white marble people looking at the scene. They are members of the family that paid for the chapel.

The city of Rome has lots of squares with fountains in them. Pope Alexander wanted to make the city more beautiful, so during his time, more fountains were made. One of the biggest squares in Rome was the Piazza Navona. On one side of the piazza was the church of St. Agnes, built by Borromini. Bernini thought it was an ugly building. He was asked to make the "Fountain of the Rivers" in the square, right outside the church. It has four figures who are symbols of four rivers. Bernini carved one of river-figures looking up at the church and throwing his hands in the air in shock at its ugliness. Borromini was very upset with Bernini's joke, which has been there now for more than 300 years. 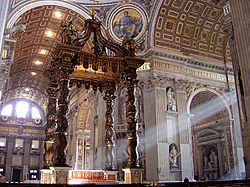 The altar with Bernini's baldacchino

Bernini's first work at St. Peter's was to design the "baldacchino" which is like a tent or "pavilion" above the High Altar. This amazing thing is 30 metres (98 ft) tall and is probably the largest piece of bronze in the world. It stands underneath Michelangelo's dome and has four huge bronze twisted columns decorated with olive leaves and bees, because bees were the symbol of Pope Urban. Pope Urban had a niece that he loved very much and he got Bernini to put her face and the face of her new-born baby boy on the columns as well.

Holding up the dome of the Basilica were four enormous stone pillars (piers). Bernini had a great idea for the big piers. He had four hollow "niches" carved into them where four huge statues could stand. This sent some people into a panic because they thought the dome would fall down, but it did not.

The basilica owns some precious relics: a piece of the True Cross of Jesus, a veil that a woman wiped the face of Jesus with, while he was carrying the cross, the spear that was used to pierce Jesus side, and the bones of St. Andrew, the brother of St. Peter. No-one knows for sure whether these things are real or not, but for hundreds of years they have been precious. Bernini's plan was the make four marble statues of the four Holy people: St. Helena who found the cross, St. Longinus who was the soldier with the spear, St Veronica who wiped Jesus' face and St. Andrew. Even though the design is Bernini's, the statues, which are all 5 metres high, were made by four different sculptors. Only St. Longinus is the work of Bernini. 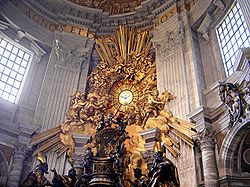 The chair of St. Peter

Bernini's next job was to make a special throne out of bronze, to hold an ancient wood and ivory throne that had been at the basilica for more than 500 years. It is called the Cattedra Petri or "throne of St. Peter". The bronze throne, with the old wooden throne inside it, is held up high at the end of the basilica, by four important saints who are called "Doctors of the Church" because they were all great writers and teachers. The statues are made of bronze. They are Saints Ambrose and Augustine for the Church of Rome and Saints Athanasius and John Chrysostum for the Orthodox Church. Above the chair is a window which is made not from glass but thin translucent stone called alabaster. The Dove of the Holy Spirit is in the middle of the window with rays of light spreading out into the basilica through a sculpture of golden clouds and angels. Bernini designed this to look like a window into Heaven. There was a great celebration when the chair was put in place on January 16, 1666. 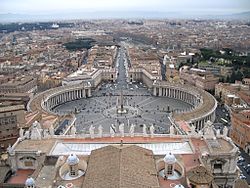 St. Peter's Piazza, seen from the dome of the basilica.

To the west of the basilica is the Piazza di San Pietro (St. Peter's Place). The piazza was designed by Bernini and built between 1656 and 1667. It was not an easy job because the designer had lots of things to think about. Firstly, many people complained that Maderna's facade on St. Peter's looked too wide, so Bernini wanted to make it look narrower, not wider. Secondly, in the old square left over from the Old St. Peter's, Pope Sixtus V had a monument set up. This monument was a precious Ancient Egyptian obelisk (which is like a tall column, but with four flat sides). From its base to the top of the cross (that the pope had put on top) it was 40 metres (131 ft) high, and had been brought to Roman in ancient times. The obelisk really should be at the centre of the new square, but it was not in quite the right place, and was very difficult to move without breaking. The third problem was that Maderna had built a fountain to one side of the obelisk, and Bernini needed to make another fountain to match it, otherwise the design would look unbalanced.

Bernini solved the problem by making two areas, instead of one huge one. The first area is an almost-square area right in front of the facade. It is cleverly designed with sloping sides that make the building look taller and not so wide. The second part of the piazza is oval. It has the obelisk at the centre with two fountains on either side at the widest part. The two parts of the piazza are surrounded by a colonnade (covered walk-way) which is carried on tall columns. All around are large statues of saints which seem to look down on the thousands of visitors that come to the square every day. The colonnade is in two great arcs that seem to stretch out like loving arms, welcoming people to the Basilica. In recent times some buildings were demolished, making another square, to match the one near the piazza. It is a good place for vans to park and can be seen in the photo.

The Chapel of the Sacrament

Bernini's last work for St. Peter's, 1676, was to decorate of the Chapel of the Sacrament. He designed a miniature temple just like the one that was built over the place where St. Peter died. He made it bronze covered with fine gold. On either side is an angel, one gazing in adoration and the other looking towards the viewer in welcome. Bernini died in 1680 aged 81, after working for St. Peter's for 40 years of his life.

All content from Kiddle encyclopedia articles (including the article images and facts) can be freely used under Attribution-ShareAlike license, unless stated otherwise. Cite this article:
Gian Lorenzo Bernini Facts for Kids. Kiddle Encyclopedia.