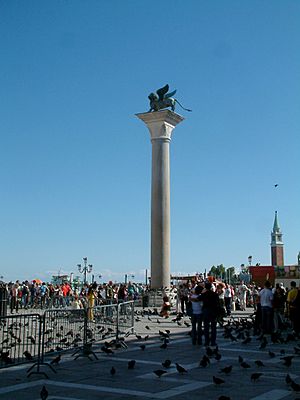 A column in architecture is a vertical element that transmits the weight of the structure above to the structure below. Columns can be either a single piece or several pieces put together. Columns are frequently used to support beams or arches on which the upper parts of walls or ceilings rest.

Stone columns were already used in the architecture of ancient Egypt as early as 2600 BC.

All content from Kiddle encyclopedia articles (including the article images and facts) can be freely used under Attribution-ShareAlike license, unless stated otherwise. Cite this article:
Column Facts for Kids. Kiddle Encyclopedia.