Nîmes is a commune. It is the prefecture of the Gard department in the Languedoc-Roussillon region. Nîmes dates back to Ancient Rome.

Nîmes was an important Roman town. Many sites have been discovered, including:

The town was supplied with water by the Pont du Gard. 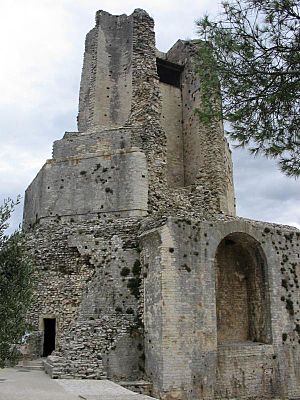 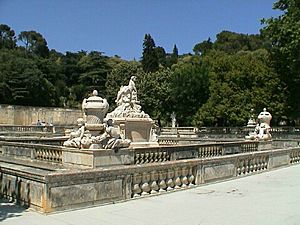 Several important remains of the Roman Empire can still be seen in and around Nîmes:

There is modern architecture at Nîmes too: Norman Foster conceived the Carré d'art (1986), a museum of modern art and mediatheque, and Jean Nouvel designed the Nemausus, a post-modern residential ensemble.

Tree-shaded boulevards trace the foundations of its former city walls.

Nîmes is historically known for its textiles. Denim, the fabric of blue jeans, derives its name from this city (Serge de Nîmes).

The asteroid 51 Nemausa was named after Nîmes, where it was discovered in 1858.

Two times per year, Nîmes hosts one of the main French bullfighting events, Feria de Nîmes (festival), and several hundreds of thousands gather in the streets.

In 2005 Rammstein filmed their #1 live Album Völkerball in Nîmes, and are returning in 2017.

Metallica's live DVD Français Pour une Nuit (English: French for One Night) was recorded in Nîmes, France, in the Arena of Nîmes on July 7, 2009, during the World Magnetic Tour.

Nîmes is twinned with:

All content from Kiddle encyclopedia articles (including the article images and facts) can be freely used under Attribution-ShareAlike license, unless stated otherwise. Cite this article:
Nîmes Facts for Kids. Kiddle Encyclopedia.