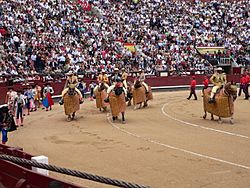 The initial procession of a corrida, with three teams of bullfighters. 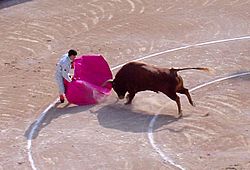 The suerte de capote: matador uses cape to cause the bull to pass him. 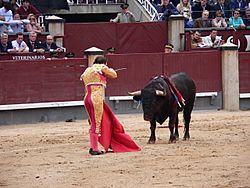 Matador in the tercio de muerte 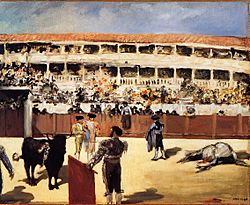 Bullfighting is an old sport. Today it is mostly done in Spain, and in Portugal, and some countries of South America.

The largest bullring is the Plaza México in central Mexico City, which seats 48,000 people, and the oldest is the La Maestranza in Seville, Spain, which was first used for bullfighting in 1765.

The Spanish bullfight (Corrida de toros) is a fight to the death. The modern bullfight has a ritual. It has three distinct stages, the start of each being signalled by a trumpet. The bullfighters (Toreros) enter the arena in a parade, to Paso doble music. The rules, costumes and traditions were sorted out by Paquiro (Francisco Montes Reina, 13 January 1804 – 4 April 1851, the greatest matador of his time.

A team of bullfighters is seven men. The leader is the matador, and he has six assistants, who play roles in the drama. Bullfighters' costumes are inspired by 18th century Andalusian clothing. Matadores ('those who kill the bull') are easily seen by the gold of their traje de luces ('suit of lights').

At the end comes the tercio de muerte ('the third of death'). The matador re-enters the ring alone with a small red cape, and a sword. The cape called a muleta. The matador uses his cape to attract the bull in a series of passes. The faena is the performance with the cape. The faena ends with a final series of passes in which the bullfighter tries to move the bull into position. He then stabs it between the shoulder blades and through the aorta or heart. The act of thrusting in the sword is called an estocada.

If the matador gets it wrong, he may be gored by the bull's horns, and killed. This does happen: some very famous matadors have died in the ring. When the great matador Manolete was killed in the ring at the age of 31, three days of official national mourning were held. Bullrings do have an infirmary with an operating room, for the immediate treatment of bullfighters with horn wounds.

There is great opposition to the bullfight from animal welfare organisations. There are also versions of the bullfight in which the animal is unharmed.

Bullfighting has influenced all forms of art and culture. Ernest Hemingway said of bullfinghting: "Bullfighting is the only art in which the artist is in danger of death and in which the degree of brilliance in the performance is left to the fighter's honour". Spanish dance and musical forms such as the paso doble and flamenco are heavily influenced by the spectacle of the bullfight.

All content from Kiddle encyclopedia articles (including the article images and facts) can be freely used under Attribution-ShareAlike license, unless stated otherwise. Cite this article:
Bullfighting Facts for Kids. Kiddle Encyclopedia.