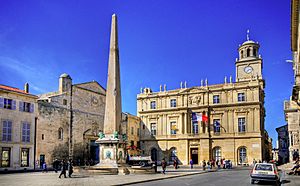 Arles is a city in the south of France. It was built in the 6th century BC by the Greeks. Today more than 50,000 people live there. In the 1880s, the famous painters, Vincent van Gogh and Paul Gauguin lived there. Vincent van Gogh painted his famous Sunflowers in Arles.

The city is at the heart of the Camargue. Not many people live in this region, so there is a lot of free land around Arles. Because of this, Arles is the city in France to have the largest area (nearly 760 square kilometres).

All content from Kiddle encyclopedia articles (including the article images and facts) can be freely used under Attribution-ShareAlike license, unless stated otherwise. Cite this article:
Arles Facts for Kids. Kiddle Encyclopedia.