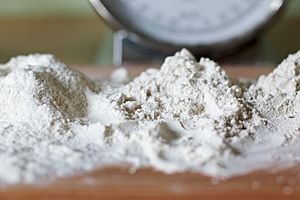 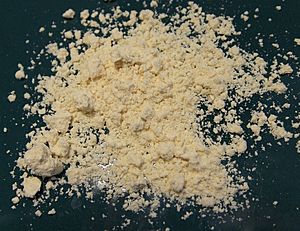 Flour is grains that have been dried and ground into powder. It is usually made of wheat, but can also be made from many other grains, nuts and other substances. Flour is used to make many foods.

Flour is an important part of bread, pasta, cookies, cakes, tortillas. Flour is made in a flour mill where the grain is put between two stones or steel wheels which are rubbed together to make the grains into powder.

The main kinds of flour used in cooking are all-purpose flour, self-raising flour and cake flour. Self-raising flour contains a leavening agent. This makes the food rise (expand) during baking. It produces lighter and softer baked foods by creating small bubbles. Flour that does not have a leavening agent is called all-purpose flour, or plain flour.

Flour can also be made at home. Some people like to make flour at home because when flour comes from the factory, the outer shells of the grains have usually been removed. The outer shells have fiber which is needed for metabolism. Flour has many nutrients. You can even make flour out of things such as pumpkins, pumpkin seeds, brown and white rice, wheat, etc. 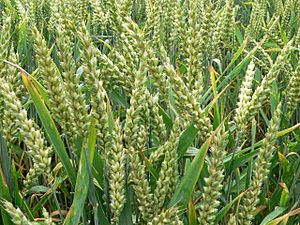 A field of wheat prior to harvesting
Main page: Wheat

It was discovered around 6000 BC that wheat seeds could be crushed between simple millstones to make flour. The Romans were the first to grind seeds on cone mills. Most mills were driven by wind (windmills) or water. Later, they were driven by steam. In the 1930s, some flour began to be enriched with iron, niacin, thiamine and riboflavin. In the 1940s, mills started to enrich flour and folic acid was added to the list in the 1990s.

All content from Kiddle encyclopedia articles (including the article images and facts) can be freely used under Attribution-ShareAlike license, unless stated otherwise. Cite this article:
Flour Facts for Kids. Kiddle Encyclopedia.