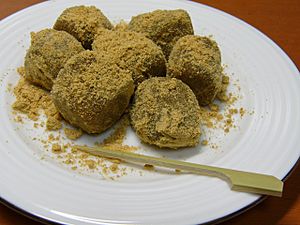 Kinako is produced by finely grinding roasted soybeans into powder. The skin of the soybean is typically removed before pulverizing the beans, but some varieties of kinako retain the roasted skin. Yellow soybeans produce a yellow kinako, and green soybeans produce a light-green product. Kinako, being composed of soybeans, is a healthy topping and flavouring which contains B vitamins and protein.

Kinako is widely used in Japanese cooking. Dango, dumplings made from mochiko (rice flour), are commonly coated with kinako. Kinako, when combined with milk or soy milk, can also be made into a drink. One example of its use in popular foods is warabimochi, which is a famous kinako-covered sweet.

All content from Kiddle encyclopedia articles (including the article images and facts) can be freely used under Attribution-ShareAlike license, unless stated otherwise. Cite this article:
Kinako Facts for Kids. Kiddle Encyclopedia.