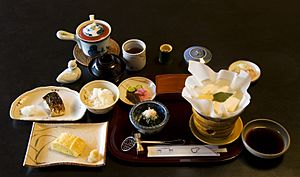 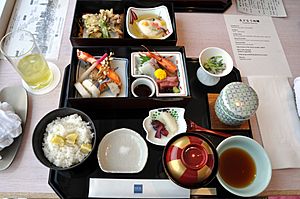 A Japanese teishoku meal including tempura, sashimi, and miso soup 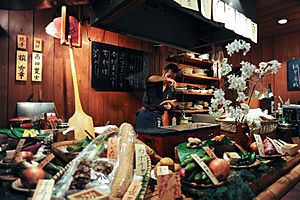 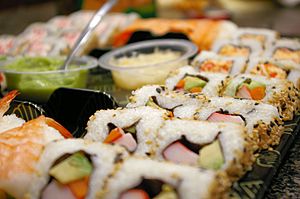 Japanese cuisine encompasses the regional and traditional foods of Japan, which have developed through centuries of social and economic changes. The traditional cuisine of Japan (和食code: ja is deprecated , washoku) is based on rice with miso soup and other dishes; there is an emphasis on seasonal ingredients. Side dishes often consist of fish, pickled vegetables, and vegetables cooked in broth. Seafood is common, often grilled, but also served raw as sashimi or in sushi. Seafood and vegetables are also deep-fried in a light batter, as tempura. Apart from rice, staples include noodles, such as soba and udon. Japan also has many simmered dishes such as fish products in broth called oden, or beef in sukiyaki and nikujaga.

Dishes inspired by foreign food in particular Chinese food like ramen, fried dumplings, and gyōza—as well as foods like spaghetti, curry, and hamburgers have become adopted with variants for Japanese tastes and ingredients. Historically, the Japanese shunned meat, but with the modernization of Japan in the 1880s, meat-based dishes such as tonkatsu and yakiniku have become common. Japanese cuisine, particularly sushi, has become popular throughout the world. In 2011, Japan overtook France in number of Michelin-starred restaurants and has maintained the title since.

Soya beans are a very important ingredient in Japanese cooking; it is used in soya sauce, miso and tofu. Soya milk is also used as a drink. One example of a dish with soya beans in it, is tofu. Tofu is made from pressing soybeans into cubes and then boiling them. Tofu is often in soups and stews. Deep fried tofu is also used in many popular Japanese dishes, for example as kitsune udon and inari sushi. Soya beans also have omega 3 fatty acids, that can also be found in salmon. 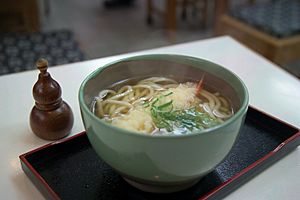 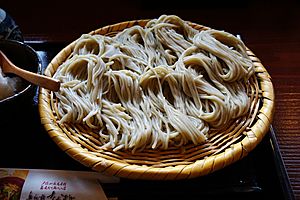 Noodles (like in most Asian foods) are used often in Japanese foods. The dishes usually come originally from China; nevertheless they have reached a unique development in Japan. 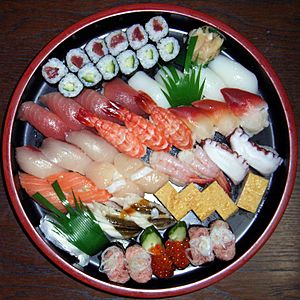 Japan is surrounded by the ocean so there is a rich variety of seafood which is an important part of Japanese cooking. 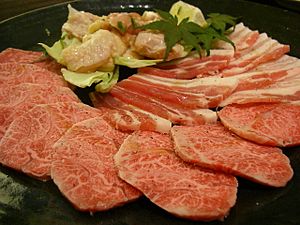 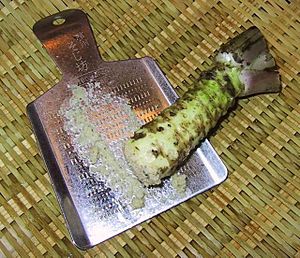 Japanese people did not eat meat until the Europeans first came. Fish was the most common food.

Wasabi is Japanese horseradish. It is often a green paste used with sashimi and sushi. Wasabi is also used with many other Japanese foods. Wasabi is sold as a paste or in powder form. Wasabi powder has to be mixed with water to be turned into a paste. Wasabi has a strong, very spicy (hot) taste. 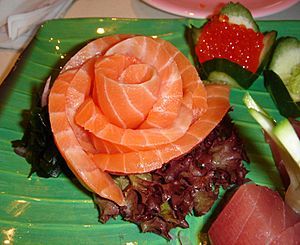 Sashimi is very thinly cut raw seafood. Many different kinds of fresh fish and other seafood are served raw in Japanese dishes. Sashimi is one of them. It is almost the same as sushi, but it has no vinegar rice. When the slices of fish are put on small pieces of rice they are called "Nigiri Sushi". Sashimi is artistically arranged and put on the plate on top of shredded daikon and shiso leaves. The fish pieces are dipped into soya sauce before being eaten. 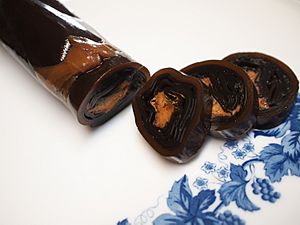 A roll of kombu with salmon inside, cooked

Seaweed has been a very important part of Japanese dishes for a long time. Today, many different types of seaweed are used in soups, seasonings and other forms of Japanese cooking. These are the three seaweeds used the most: 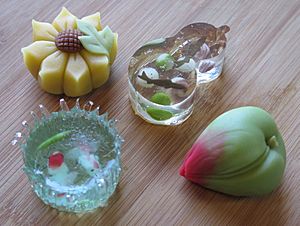 Wagashi, a kind of Japanese sweet commonly served at a traditional tea ceremony

Traditional Japanese sweets are known as wagashi. Ingredients such as red bean paste and mochi are used. More modern-day tastes includes green tea ice cream, a very popular flavor. Almost all manufacturers produce a version of it. Kakigōri is a shaved ice dessert flavored with syrup or condensed milk. It is usually sold and eaten at summer festivals. A dessert very popular among the children in Japan are dorayaki. They are sweet pancakes filled with a sweet red bean paste. They are mostly eaten at room temperature but are also considered very delicious hot.

All content from Kiddle encyclopedia articles (including the article images and facts) can be freely used under Attribution-ShareAlike license, unless stated otherwise. Cite this article:
Japanese cuisine Facts for Kids. Kiddle Encyclopedia.