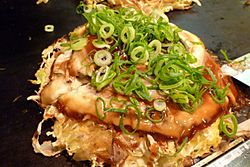 Okonomiyaki (お好み焼きcode: ja is deprecated ) is a Japanese food dish of a pan-fried batter cake and different ingredients including meat, seafood, and vegetables. Most okonomiyaki has cabbage in it.

The name of this dish means "cook what you like". Okonomiyaki is mainly associated with Kansai or Hiroshima, but is widely available throughout the country.

Okonomiyaki is the popular food in Japan. In postwar Hiroshima, okonomiyaki was invented to save a few wheat flour and vegetables (for example, cabbage, bean sprout, green onion and so on.) because foods are shortage. It is called "okonomiyaki (fried liking foods)" because people made okonomiyaki to include their favorite foods in the past.

How to make it

First, you cook mixed water and wheat flour and shape like a thin circle.

Second, you put cabbage, pork , other toppings and tempura bits and turn it over.

Third, you put fried noodles on it.

Fourth, you shape egg like a thin circle and put it below.

Fifth, you turn it over and put sauce and green laver on it.

All content from Kiddle encyclopedia articles (including the article images and facts) can be freely used under Attribution-ShareAlike license, unless stated otherwise. Cite this article:
Okonomiyaki Facts for Kids. Kiddle Encyclopedia.